Project Open Octave Studio, is the open source software for musicians to compose and create digital audio and is ideal as music production software as well as a Digital Audio Workstation (DAW).

With a 2011 version of Open Octave Studio already released, 2012 version development needs $50,000 so that professional developers can be included to provide more advanced features.

Here is a great opportunity for orchestra musicians and devs with music domain expertise to pitch in develop unique, charge-free, sophisticated software. 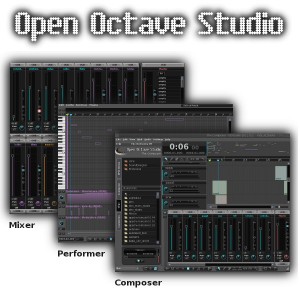 appreciate the power Linux operating system provides for their work processes. Though, Wendy Cherrett first wrote a custom version of Open Octave Studio, soon in October 2011, it was available under public license, free to use music software.

The Open Octave Midi is licensed under GPL v2 and icon sets along with a sample library (Sonatina) are available under CC-license. The latest round of development will work towards providing porting for Windows and Mac as well.

Aligned with commercially available software for music production, Open Octave offers advanced features for music composing to production. However, the difference is that you can use the best software, in the music industry, for creating, composing, producing music at no-cost. This is non-charge software following a open source licensing structure allowing users to achieve commercial grade production standards, without the constraints of budgets- expensive or otherwise.

Released in 2011, this application is developed on Qt helps in developing music for orchestra, writing for films as well as recording.

The new round of development is aimed at providing critical service to students and the great music community, who are constrained by expensive license fee say the developers- “We have similar features to Commercial music programs like Pro Tools, Cubase, Nuendo, SONAR, but the main difference is that Open Octave Studio doesn’t charge any licensing fees. That’s why we need your support.”

Strongly endorsing Linux’s own FOSS philosophy, Open Octave developers want to ensure professional musical goals are not sacrificed, thereby allowing music to be the realm of only the “rich and well-connected. We want to give every musician a chance.”

“Here are some of the features that will be added or enhanced with your donations.

If you are looking for more details and specifics on Open Octave Studio go here.

Install Mattermost with PostgreSQL on Ubuntu 16.04