TV is becoming smart and so is Canonical. Canonical has displayed the Ubuntu TV, prototype unit, at the ongoing mega event of Consumer Electronic Show the CES 2012 in Las Vegas. In the exhibition Canonical demonstrated an optimized version of its Ubuntu Linux OS that will be run on Smart TVs.

What is a Smart TV?

Ever since TV showed up first back in 1920, the technology behind the TV is evolving at an unmatched pace. We have seen TVs employing the cathode ray tubes, following the IR, black and white, colored, flat-screen, Plasma, LCD and LED. Last year was the year of the 3D TVs while they could not capture much attention, Smart TVs from the current era are gaining significant interest in audience! What is all the hype around the smart TVs? Let us investigate the exclusive functionilities of the smart TV to find the answer. 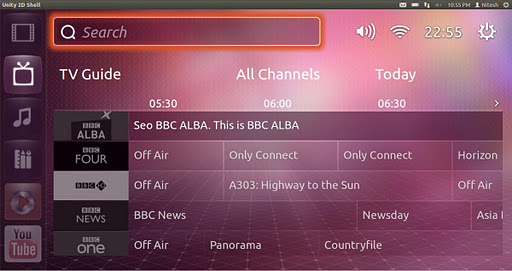 Having said all that, you see you are already interested in getting a Smart TV  for yourself. MarketsandMarkets a research firm projects that the global market for smart televisions is expected to increase as much as US$265 billion by 2016, up from $64 million in 2011.

And now comes Ubuntu a Linux-based OS originally designed for desktop and laptop computers and servers. Ubuntu TV is actually first step in the Canonical’s long-term strategy to offer Ubuntu for a wide range of processor-embedded consumer devices, including automobiles, tablets and other household appliances. In this regard Canonical CEO Jane Silber said “[Ubuntu TV] is a first proof point on a broader device strategy…“

Silber said “It’s an operating system and experience for your television,“. He further added “We’re focusing on making the TV intuitive and usable again, with a single, elegant interface.” The Ubuntu TV look like Ubuntu and fortunately or unfortunately has the widely disliked Unity interface.

Don’t be overwhelmed by the Smart TV definition given above. Ubuntu TV is still evolving, does not provide all the functionalities. Lets see what the Ubuntu TV has for you:

So what the Ubuntu TV does not have so far?

Benefits of Ubuntu as a Smart TV OS for Manufacturers

Silber claims Canonical offers a lot of advantages to OEMs (original equipment manufacturers). As  Canonical is leargely “neutral party” therefore it will not restrict its platform to any particular content offering services. This will inturn enable manufacturers to develop their own offerings and forge their own revenue-sharing partnerships. Silber elaborated “For manufacturers that post-sale service revenue is an important piece,“. As Ubuntu is an open platform, manufacturers will also be able to participate in the development process of OS along with the hardware giving them a chance to take the maximum benefit from the potential Of the OS.

Another advantage manufacturers will get with the Ubuntu OS at the bottom is the freedom to modify the OS to adjust it according to the hardware requirements such as for their own choices in CPU, memory, screen-size, storage space, input devices and various other factors.

Also,Ubuntu OS already has large user base, comprising of many developers who are actively involved in developing even at this very moment; this again will benefit the manufacturers of the Ubuntu TV.

Though Ubuntu is a relatively new player in this ecosystem, it has great potential for success as being opposed to walled garden approach. As Silber says ‘the ecosystem needs that neutral platform..And I think Ubuntu is the best fit there.”