A Screen cast software(screen recorder) is the  recording of computer screen, also known as a  screen capture with audio. we can also hear a regular word screenshot, the difference between screenshot and screen cast is the  screenshot generates a single picture of a computer screen but, where as screen cast records all the user activities on screen with audio narration like movie it would be saved as in video format. the video is in sevaral formats like flv,mp4,avi etc..

The  screen cast is very much useful today’s world. It can be useful to demonstrate and teach the use of software features.This software is commonly used for desktop recording, gameplay recording and video editing.

There are many screen casting softwares available in market some are free and some are commercial. In this arical we will know about The top 5 Screen cast Softwares for Linux. I am writing it in my own way and you may disagree with me with my ranking of the softwares.

The top five screen casting software are as follows

Simple screen recorder is a linux program is used to record the programs and games. It is simple and easy to use than other programs. It has Graphical user Interface, It Records the entire screen or part of it, or records OpenGL applications directly. We can Pause and resume recording at any time. 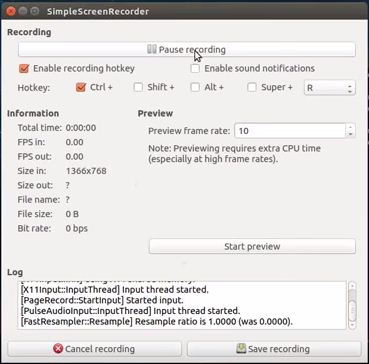 The official page to Download Simple Screen Recorder is from here.

Record my desktop is a Desktop session recorder for GNU/ Linux. we can record in various formats like flv, avi, mp4 etc. we can Pause and resume recording at any time.

By using the following command we can easily install the Record my desktop app in Ubuntu.

The official page to Download Recordmydesktop is from here.

Kazam is also a simple screen recording program that will capture the content of your screen and record a video file that can be played by any video player that supports VP8/WebM video format.

It is Easy to use, output looks great and it handles sound from the mike and internal audio monitor at the same time. Very excited. Excellent software.

It Records the entire screen or part of the selection area.

The official page to Download Kazam Screen caster is from here. 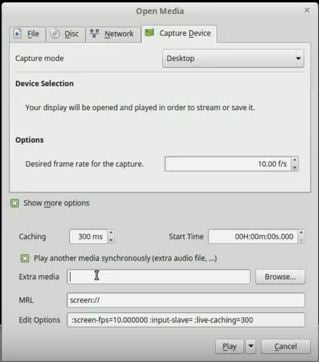 The process to capture to screen by using VLC player is as follows:

Open Vlc media player, select media->open capture device. Then select the capture mode is Desktop in Capture Device tab. Select the frame rate, if you want to supply additional audio select it. Finally select it convert and destination to save the file and format to save.

The official page to Download Vlc media player is from here.

we have to get the source of wink by using wget command as follows.

Extract the wincurrentver.tar.gz and run th command, Then run the “installer.sh” shell script in the command prompt and it will prompt you for the path to install Wink

Wink is a 32-bit application. If you are running a 64-bit system, make sure ia32-libs is installed or not, if doesn’t installed install it by following command

The official page to Download wink screen cast software is from here.