Linux OS, with time are emerging as fairly popular Operating System. This might not be the case with desktops though, where Microsoft Windows has already linux-logotaken a sizeable (and of course unparalleled edge); but this surely is not the era of desktops. The year ahead is the year of smartphones and tablets, a domain where Windows has miserably failed at the hands of Android—Android that is based on Linux Kernel. In the post we will analyze the data and stats from last 3 years and particularly of last year, to see the growth of Linux on desktops, tablets and smart phones; comparing it to Microsoft Windows.

Linux is getting popular that’s certain. And if you do not want to peek into stats then you have a simple metric. Virus and the games! Both of which are increasing for Linux, in turn meaning that more people are turning towards Linux OS. Today we are getting number of machines coming pre-loaded with Linux. Lets investigate further how Linux is getting popular, on the basis of stats. The bad part first.

As already noted that Linux is not so popular on desktops and certainly won’t be popular, as Windows has already taken lead with quiet a margin. When investigating the Operating system shares, we see that Linux, by the end of 2011 claims only about 0.83% of the complete market share. Microsoft Windows 7 claims the major share of 42.65% while the other releases of Windows XP and Vista claim 36.44% and 10.88%. But what matters is not the percentage share alone; it is the trend. And the trend is somewhat bright for Linux, yet being very slow. When the year 2011 started Linux claimed a share of 0.74% and throughout the year the share kept steadily increasing and ended at 0.83%. A monthly chart shows how the share grew over 2011.

The following chart shows the growth of Linux in three years. Not any notable variation increase or decrease is noted in the usage, when seen on the large scale.

Long gone are the days of desktop computing. Today computing is more mobile. It’s about all-purpose smartphones used for productivity on the go. And when we talk about smart phones, we simply mean Android, iOS or Blackberry. Windows Smartphones are nowhere! Android, mainly based on Linux kernel is the most thriving OS for smartphones. Though trends show that adoption of iOS and Android over symbian, go hands-in-hands but trends are more favorable towards Android. According to the Global Stat Counter, Android took off with a 13.6% market share in December 2010 and rose to 14.61% market share in the beginning of the past year, 2011. The market share continued to increase until December 2011, ending with the market share of 21.83%. When comparing to iOS, the trend varies greatly. At the start of this year the iOS was popular mobile OS with 23.57% usage, went down to 19.41 % in August 2011 and ended up at 22% of mobile OS share in 2011. In contrast Global Stats does not categorize the stats of MS Windows Mobile OS as a separate OS being infinitesimal. Instead the MS Windows Mobile OS is merged in the “Others”; therefore indicating a very small market share.
Wikipedia seeks the decreasing market share of MS Windows in these words: “Windows Mobile’s share of the smartphone market has fallen year-on-year, decreasing by 20% in Q3 2009. In August 2010, it was the fifth most popular smartphone operating system, with a 5% share of the worldwide smartphone market”. The source sited is “NPD Group”. According to the same source by the end of 2011, Windows OS for Mobile only claims 3% market share! The NPD source indicates the following trends in Mobile OS.
So here is where Android, and in turn Linux is taking a consummate lead over Microsoft. Android is growing with over millions of apps for the OS already available in the store. Also the development for Android is going at a pace that Windows will not be able to match any time sooner.

The following image is adopted from the same source, detailing the mobile OS usage: 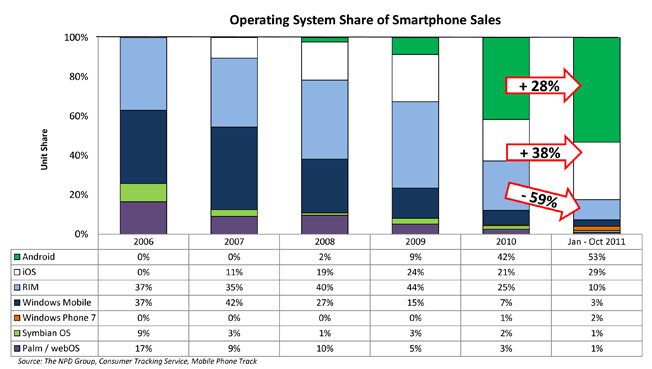 The year of 2011 was the year of tablets. Tablets not only find their places as luxury devices for entertainment, gaming and surfing the web but now tablets are been excessively deployed as production devices in enterprises and teaching devices at schools. And when it comes to tablet it is just about the iOS or the Android. No third no fourth. From last year 2011 the tablets that dared to deploy their custom OS failed miserably for example the HP TouchPad and Blackberry Playbook. Though 2011 was another year for iPad, the tech world witnessed some very fine Android Honeycomb devices; namely Samsung Galaxy Tab, ASUS Transformer, ASUS Transformer Prime, Motorola Xoom and ASUS Slider. And in the horde of tablets (about 45 notable tablets) there were only 5 tablets to have Windows OS, and unfortunately all of them failed to find any place in market. Tablets in 2011 aided with Windows OS were HP Slate 500, ASUS Eee Slate, Fujitsu Stylistic, MSI WindPad 110W and Acer Iconia W500.

So for the year 2011 the only popular OS for tablets was Android Honeycomb that again is based on Linux Kernel.
Beyond these devices i.e. desktop, mobiles and tablets we see there are other frontiers where Opensource outsmarts Microsoft.

Not to forget the opensource browsers (Google Chrome and Mozilla Firefox) that is rapidly increasing their share when compared to MS Internet Explorer. Also the share of Apache has increased to 65% while that of IIS has dropped to 16% in mid of 2011.

Here we come to the end of analysis. To conclude we see that Linux is flourishing OS, the OS of the future, if not n desktops then on Servers, mobile and on tablet devices. 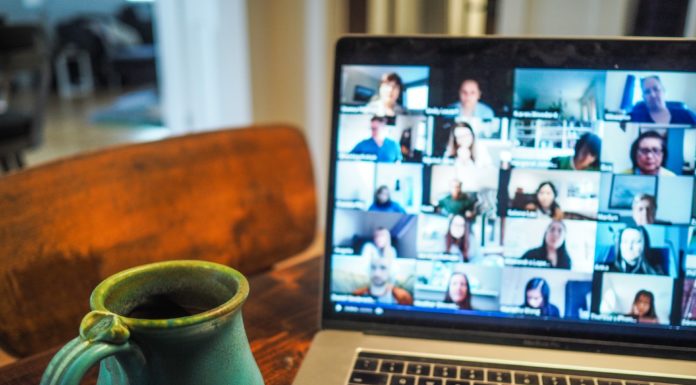 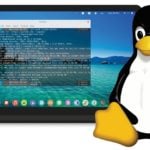