The Great Jitters: Pudding Panic is a unique action puzzle game developed by the Berlin-based indie game developers team called Kunst-Stoff GmbH. This game has already received many praising critics and awards for a variety of things and platforms. Time to get our hands on the linux version, and see why this game has caused so much positive hum around it.

You are guiding a jelly pudding on a train-car, aiming to reach the exit door of every map. This is the main aim of the game but not the only one. There are several things on the rail tracks of every map that you must collect in order to unlock the next maps etc. On the opposing side, there are angry witches, clattering skeletons, fire-spitting dragons and many more things that try to block your way and make you faint in fear. To overcome these obstacles you basically have some frightening weapons at your disposal and the ability to change tracks through manipulating junctions.

This kind of gameplay makes Pudding Panic a very unique puzzle game. It requires fast thinking and deciding, planning ahead and counting in carefully all the factors like the speed of the wagon or the upcoming possible routes. This is exactly what gives an “action” touch to the gameplay, and what drives crazy the people who need to take their time to think things at their own pace. Besides the lack of a “slow time” feature, I also have another complaint. There seems to be little to none adjustments done to the gameplay while porting this game from touch screens to mouse and keyboards. The most annoying result is that the keyboard is almost useless. You have to move the camera, activate weapons and manipulate the tracks using the mouse. This feels stupid and it makes playing more difficult but lets not be too harsh with this adorable shaky jelly. I can assure you that although there are some little things missing, or not working as they should, this game is highly addictive and very enjoyable no matter what. You’ll find yourself playing the same level again and again till you make it, getting huge amounts of excitement and joy in every single ride. There are 48 levels on 4 worlds of increasing difficulty for you to explore. The “skip level” ability which is always important for puzzle games, is present.

The design of The Great Jitters is aiming to be comical and creepy at the same time, and it actually is. The graphics are very beautiful for this kind of games, but not too much, allowing the game to be playable on even the oldest low-specs machines. 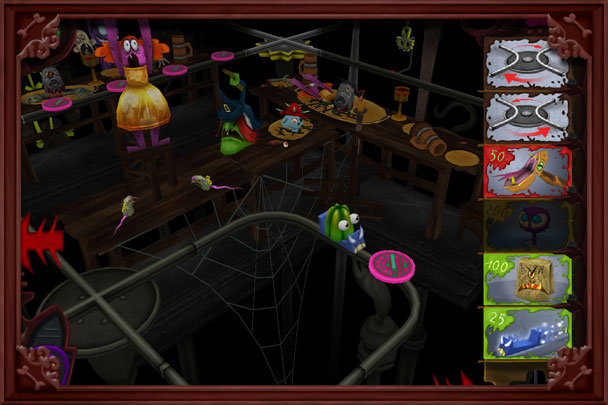 There is this “haunted house” feeling in everything. I can’t say that attention to detail is pathological, but in general it is good enough.

One thing that I like in games is when sounds are both informative and inside the atmospheric context of the game. This is exactly what you will find on the corresponding sector of Pudding Panic. As for the music…well…there is not much variety but believe me the music of this game never gets boring. Nice!

You may have never payed 7.99 euros/ 8.99 USD for a jelly pudding that you are not going to eat, but in that case it definitely worths it. You may buy Pudding Panic to fill some weekend free time, but you’ll probably find yourself “stealing” time during the week to play this completely original action puzzle game.