Gradually all the data from our desktops is moving into the cloud on the web. We seek to accomplish most of our day-to-day jobs (and rather trivial jobs) from preparation of document, presentations and spreadsheets to computation, media conversion, minor photo editing etc. via web-apps. As the web becomes the center of our daily computing, web-browsers turn out to be all the more important.  Google Chrome released its latest version, version 12 earlier this June followed by Mozilla’s Firefox (controversially) version 5 later this June; official release dated 22 June. In this post I shall review the popular browsers of June 2011 and look at how web-browsers race is shaping up! 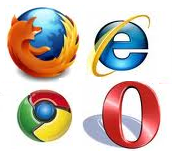 The most popular Browser & Browser version of June 2011

You will be pleasantly surprised to know that despite Firefox 5 was released just 14 days back, it claims significant share in web-browser market for June 2011! Internet Explorer being the default web-browser for Microsoft Windows still manages to take the lead in the browser race for the last month. Nevertheless, Internet Explorer’s latest version, version 9.0 is still facing inertia from its users probably due to drastic makeover; and IE 8.0 claims the more user base (in fact more user base than any other browser). Firefox 4, released back in March this year has steadily gained popularity over its version 3.6 that long dominated the web-browser market. Chrome 12, on the other hand, lags behind the Firefox 4 with minor difference. The chart explains more! 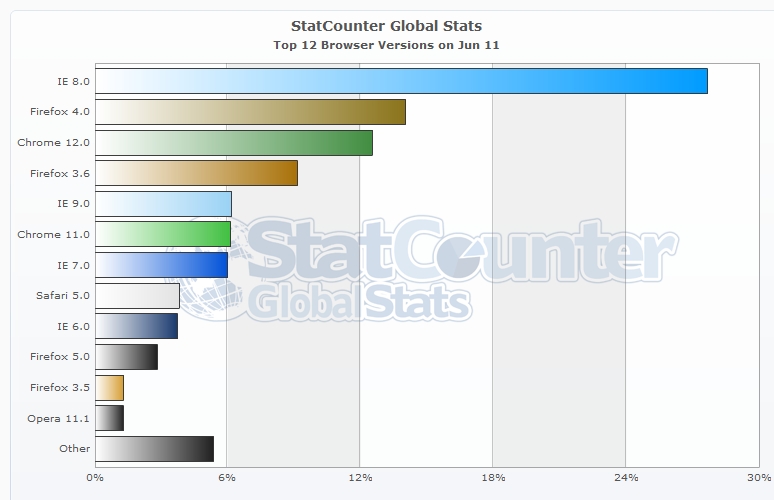 Overall, the trend of June 2011 for browsers was pretty much expected. Microsoft Internet Explorer secures the first while Mozilla Firefox and Google’s Chrome secure 3rd position. Safari and Opera, on the other side, claim to be less popular web browsers. 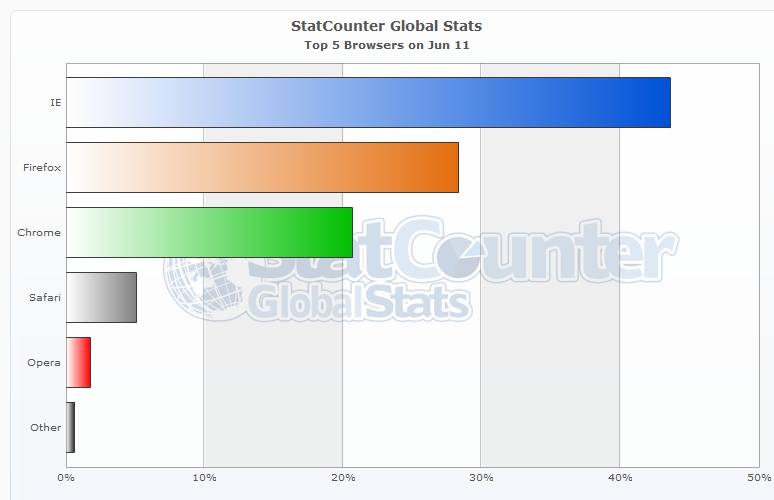 The most popular Browser of 2011, until now!

When the year 2011 started the prominent browser versions were IE 8, Firefox 3.6 and Chrome 8.0.  Since then we saw some major releases of the most popular browsers including version 9 for IE, version 4 for Firefox and version 10,11 and then 12 for Google Chrome. Initially when IE 9, Chrome 9 and Firefox 4 were released in March 2011, generally not many people opted to upgrade. However with the passage of another 3 months we see noticeable changes in the market. Though IE still gets the most share but it’s interesting to note how Firefox 4 in just 3 months gets the 4th position! 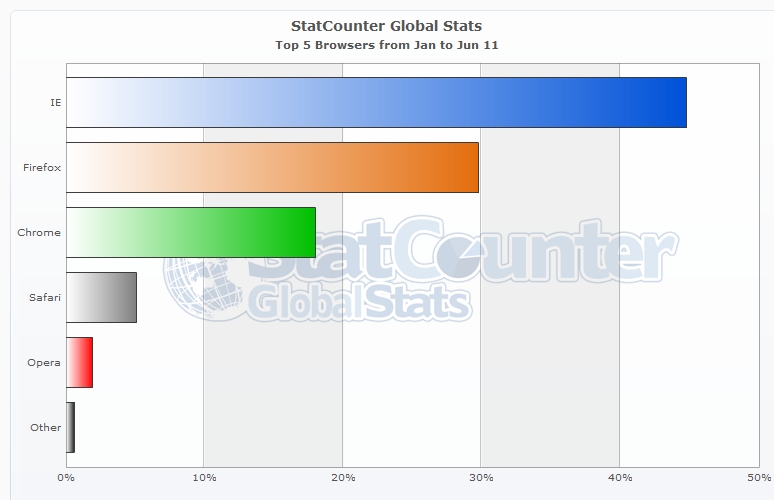 By version, the usage share of this year is illustrated below: 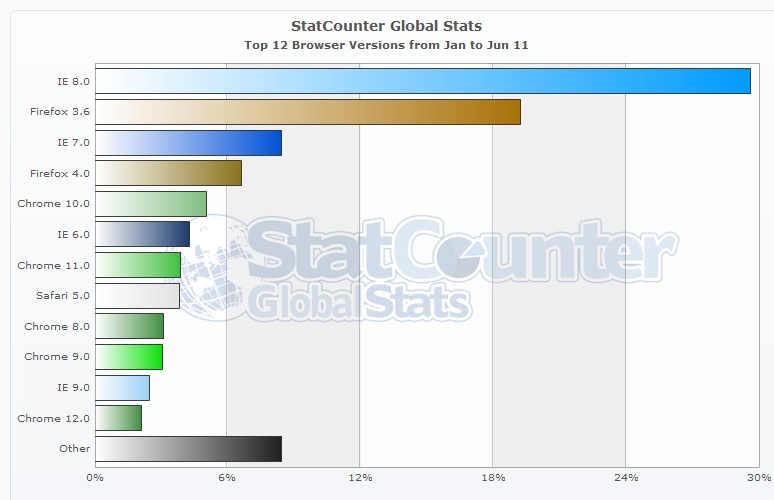 The following pie chart shows the individual market share of each browser in percentage for this year.

The trends, who will win?!

Which browser will win? this is a million dollar question. As the browser competition is heating up it we see each browser striving to bring new innovation and performance and speed enhancements. If we analyze the trends from the last year we notice a rather steep decrease of Internet Explorer market. The graph of Firefox remains rather consistent throughout June 2010 to May 2011 but faces slight downfall in the last month. Finally the graph of Chrome is promising and much rosier! Google Chrome consistently grows its share, almost doubling the share in last year. The graph indicates that the trends in the browser market, at present are particularly favorable for Google chrome. 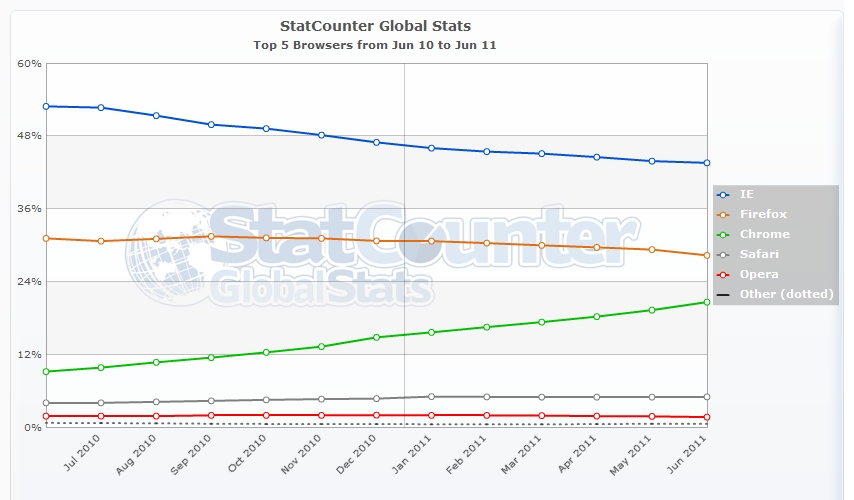 Finally who ever wins the race, this is truly in benefit of end-users who get new features, better performance and much more easier and faster access over the internet, that was not possible some years back owing to lack of  competition in Browser Market. 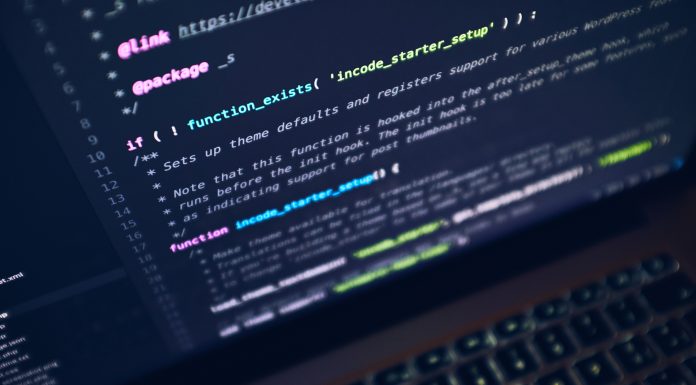