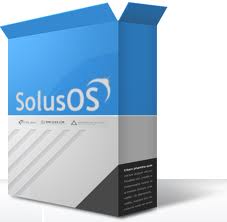 After recently installing the Debian based edition of Linux Mint operating system on my home office desktop, I decided to take a look at another Debian based Linux distribution, SolusOS.

This is my first time trying SolusOS, so I dived in with an innocent fresh mind. Upon booting the LiveCD, I couldn’t help but notice how fast the SolusOS boot process is. Whether it has been tweaked by the developers or whether it is due the lightweight nature of the distribution, I’m not too sure. 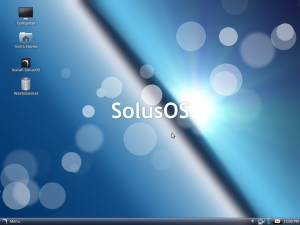 There is something that bothers me; The SolusOS ISO size comes in at just over 1GB. It’s rather big in comparison to mainstream distributions like Ubuntu and Fedora, yet I have no idea why as package selection for SolusOS is nothing unusual. There are a couple of surprises thrown in to the mix, which I’ll get to shortly. But nothing obvious that would appear to bloat the size of the installation ISO. It’s definitely something that I was curious about, so I decided to put the question forward to Project Leader, Ikey Doherty. He responded via email:

Ikey: “It is something that has been an annoyance to me for some time now. The bulk of the ISO is caused by just two things: LibreOffice (it’s a huge package) and Localizations. On systems like Ubuntu, the localizations are split off into separate packages, i.e. language-pack-*. Debian unfortunately
does not have such a mechanism. Therefore, every single localization is already installed before anything else. Add that to the size of libreoffice* packages, the base already becomes chunky. This is something that we will paying attention to for SolusOS 2 as a matter of priority.”

Some of the main features touted for SolusOS are:

It’s worth mentioning that the aesthetics and eye-candy for SolusOS are stunning! Everything you look at, click on and open has a fine polish like a brand new car. Thankfully, it’s not all just polish. SolusOS performs as good as it looks.

One issue that I have come across with some Linux operating systems in the past is lack of ability of properly managing dual displays out-of-the-box. I can gladly say that SolusOS handled everything with ease and I witnessed no dramas during my test time and on a system with only moderate specifications. 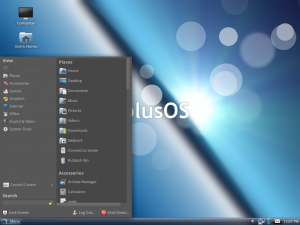 SolusOS sits on a GNOME 2.30.2 desktop environment. Although GNOME 2 is beginning to show signs of its age, it certainly doesn’t show in SolusOS. In fact, SolusOS’s polish is so impressive, GNOME 2 feels shiny and new once more. But no matter how much you dress it up, there’s no changing the fact that there will be no more support or updates for GNOME 2. So what the long term decision will be for its inclusion in SolusOS is unknown to me. But I can see the potential for easily converting the desktop to a MATE base. Which really would be not much effort considering MATE’s heritage goes right back to GNOME 2.

One particular feature that I really enjoyed using in SolusOS was the Main Menu. I don’t know whether it’s a custom version of Mint Menu or something else, but the best way I can describe it is a blend of functionality from Mint Menu and the KDE4 Menu. It’s very functional, responsive and is well designed. It is a pleasure to use and to quickly find what you searching for. Whether it be an application or location on your system.

Software selection was nice. There is a good balance of applications. Most of them bog standard that ship with most GNOME based distributions, but there are some extra goodies thrown in to the mix. PlayOnLinux and WINE add for an extra layer of compatibility. I had time to test out WINE by booting up a quick game of Plant vs. Zombies and it worked a treat. I didn’t really have the time and resources to tinker around with PlayOnLinux. But I did take a quick sneak peek at its GUI and it looks like a very capable package. PlayOnLinux+WINE are a nice addition to have shipped with SolusOS.

There’s a strength and focus on multimedia support with SolusOS. Default packages include VLC Media Player and GNOME MPlayer. And of course there’s also the usual packages you find shipped with almost all GNOME based distribution. Totem and Rhythmbox are both included with the addition of all required codecs. That’s something that always eases the pain for most new users with Linux.

When browsing the available and installed applications in SolusOS, I couldn’t help but notice something a little odd. And I have to admit it did bug me a little. Taking the final ISO size into consideration, I expected GIMP to be installed by default. Looking through the menu you’ll find that it’s not. Instead, there is GNU Paint installed. Why GNU Paint has been put in place of where GIMP should be, really, strikes me as not making sense. Unless there is some personal connection with the developers and GNU Paint, I just don’t understand it. Or perhaps it’s just time that I stop expecting GIMP to be installed on every Linux distribution available.

Considering SolusOS comes from a very small development and support team, (in fact, it’s the work of just a few people) there are no signs of this when you use SolusOS. The small development team has done a fantastic job with SolusOS and it’s a real professional Linux distribution that is more than capable of meeting the requirements of even the most demanding Linux user.