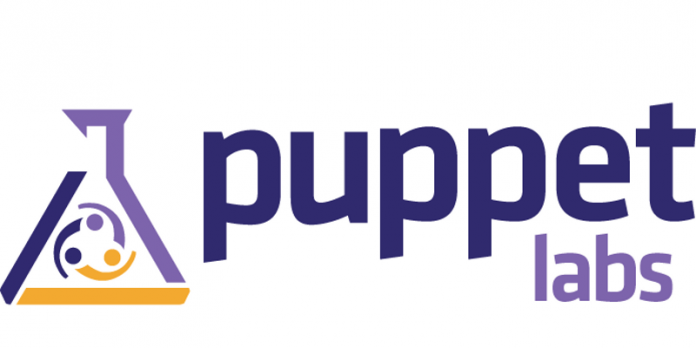 The Cloud  is one of the biggest paradigm shifts in the IT world. Instead of provisioning physical hardware in a physical data center and then managing applications running on the physical hardware, virtualization has allowed IT organizations to decouple logical infrastructure from physical infrastructure, and thereby deliver new-found flexibility to provide and manage value-add services. the need for good configuration management practices does not end when services (or parts of services) are moved to the cloud. One from the most important tools of configuration management is Puppet.

In computing, Puppet is an open source configuration management utility. It runs on many Unix-like systems, and includes its own declarative language to describe system configuration. It is produced by Puppet Labs, founded by Luke Kanies in 2005. It is written in Ruby and released as free software under the GNU General Public License (GPL) until version 2.7.0 and the Apache License 2.0 later.

Masterless mode is a puppet cluster which has no shared master, in a sense, each node is its own master. It is responsible for fetching, storing and applying manifests itself. In this article we will show you how you can set up a masterless puppet environment on Ubuntu 14.04.

We will start by creating a repository where we will store all our Puppet modules and manifests. So Open the Git Labs UI within this address: http://GIT_server_IP where GIT_server_IP is your Git server address IP. Then create a new account under the New user button and then press sign up. So after activating your account within the link of activation received on your email account you are able to sign in and start using your new account. Later press the “+New project”, concerning the Project path add Puppet then click create project and add again Puppet to the project path. For the visibility level choose Public and create again Create project button.

Your SSH URL will look like the following one:

Then we will display our public key using the following command.

Copy this public key and on your Git Labs, click on the profile settings, then click on the SSH keys => Add a SSH key => Add a description of the key in the Title field and finally paste the copied public key into the key field and click Add key to save changes.

Now, we will install Puppet and Git. We will start by downloading the Puppet package by using the following command:

And to update the system’s package list, use the following command:

And to install Puppet and Git type the following command:

Now after finishing the installation, we will push our Puppet repository so we will move to the

And type the following command to initialize the Git repository and to add everything to this directory:

And to commit the modifications we made we will use the following command:

The following command is used to add the Git project:

And to push those modifications use the following command:

Now we will log out as root and log in as sudo non root user. We will start by cleaning up the
/etc/puppet/puppet.conf

file. We will open this file using the following command:

Start by removing everything from the Master line and the last line too and we will make some changes to get at the end something like the following file:

Now we will do the last step which is the creation of a useful module for Puppet where it can run. So we will start by moving into the Puppet modules directory using the following command:

Then we will create a

Copy the following code into Pup_init:

directory after saving and closing the Pup_init.

Copy the following code to this file:

Then save and close the file.

Copy and paste the following code in the created manifest Site.p which will create a node classification called “default”

Save and close the file and use the following command to run our module:

You will receive something like this if everything is working good:

And to finish our setting up we will commit our changes to the Git repository, so we will log in as root user and move to the

Use the following command to add everything to this directory:

And type the following command to commit the changes:

And to push those changes use the following command:

And to automate this installation by using a user data you need to have a SSH key when you create the droplet and to add this key to the your Git Labs server. Then on the Enable user data add the following commands and don’t forget to replace the details about (GIT_server_IP and the username) by yours.

After this article and its description you will have a masterless Puppet system, and you can easily now accelerate various servers easily and remotely.