When I planned this review, I never really understood how difficult things would become to reach a point where I could actually run the Razor-QT desktop for some real-world testing. In a nutshell, oh my it was worth every minute of pain. Want to know more? Read on.

I tested on elementaryOS/Ubuntu with Razor-QT 0.5.2.

Installation was an absolute nightmare and I highly recommend against such a task unless you’re an advanced Linux user and know your way around a system’s installation methods and structures. Let’s clear a few things up first. Yes, there is a PPA for the Razor-QT packages. But for some odd reason, I could not add the PPA to my system. I was receiving errors. As a second option, I manually downloaded each of the required packages that were sitting in the PPA repository on Launchpad. I created a new directory and moved all the packages to my new directory:

That was the easy part. I thought the rest of the installation process would be just as easy, how wrong I could be.

I performed a simple dpkg installation command as follows:

Initially, I thought the installation of the packages was going well. But then I hit the infamous dependency not met issue that we’ve all been greeted with at some when dealing with manual installation of DEB packages using dpkg. I tried GDebi to see whether the dependencies could be met with files in my current enables repositories. This did not work.

I went back to the source of my files and checked to see whether I had downloaded all of the required packages. Oddly, the Launchpad PPA for Razor-QT is missing some of its own files which are required for it to install and work. Very odd.

I took some time out and made note of the packages that could not be installed for missing dependency reasons. After a little Google-fu, I found that all of the latest packages were in the latest Debian official repository. So I logged in to my local Debian FTP mirror using Filezilla, which would then allow me to view all of the packages to verify the mirror contained the files required to complete my installation. After quickly checking to ensure all of the files were inside the FTP mirror, I nabbed the required files via FTP in just a few seconds.

After a lot of tinkering with dpkg. GDebi, apt-get and various installation arguments with different packages, I finally got all of the required DEB packages and dependencies installed.

I was finally ready to see whether my installation had worked.

I use LightDM for my system login management. My installation proved successful and Razor-QT was available as an option for my desktop login, so I switched sessions and logged in to my system. The first thing that surprised me was the fact that Razor-QT correctly detected my dual-displays at the correct resolutions. This is something of a rarity as most new desktops I test/install simply require manually setting up my dual-displays and manually set the display resolution of each. Razor-QT done everything for me.

Appearance looks just like any other desktop. It actually looks like a mix of GNOME Classic and KDE, yet portions of its basic functions remind me of XFCE. In truth, it’s unfair to compare Razor-QT to any other desktop environment that you’ve used as it is completely new and built from the ground up.

The desktop usage is very obvious. You feel right at home just about anywhere you venture within Razor-QT. Nothing feels out of the ordinary and everything is exactly where it should be. As you’ll see in my screenshot below, my Plank dock is still visible on the Razor-QT desktop. This is not an issue with Razor-QT and is simply because Plank is part of my main OS which is used on this system of which Razor-QT was tested. This was an easy issue to workaround by moving the panel to the top of the screen. This is simply done by right-clicking on the panel and selecting Properties and then move the panel to the top of the screen of the first display. Or you can simply move the panel to another display or location if you choose.

The panel itself is pretty standard. It contains all the usual information, menu, applets, icons and indicators that you’d expect from a standard graphical desktop panel nowadays. Of course, absolutely everything about the panel can be customized and changed to the liking of the user. And the same applies to the rest of the desktop environment.

The Menu can be launched by clicking the Menu icon on the panel or simply right-clicking on an empty section of the desktop. This makes it easy to access your Menu and Applications with ease, regardless of where you are currently sitting in your system. 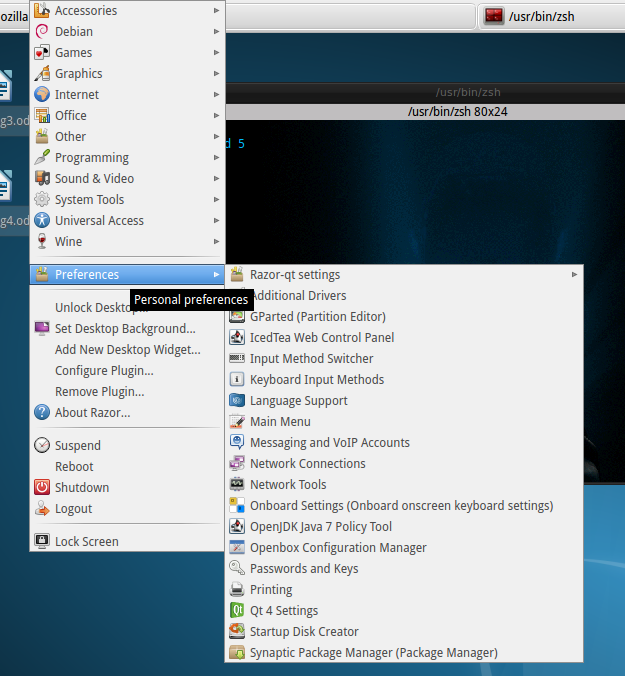 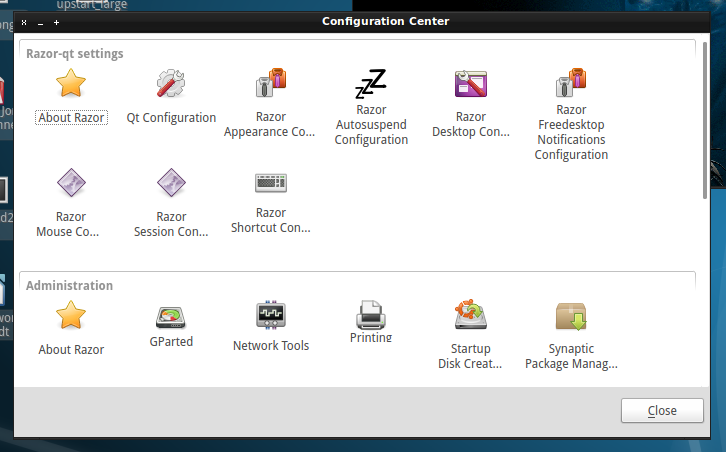 There are so many options to configure and re-configure every part of the Razor-QT desktop that it’s mind boggling. And thankfully, it’s all made so simple and accessible for any level of Linux user.

You can run your own choice of Window Manager inside Razor-QT. I tested out both OpenBox and Metacity in my test because that’s what I already have installed. Performance between the two was negligible. But purely to stay in my comfort zone, I decided to stick with OpenBox.

I like Razor-QT in its current form. In fact, if I was in the market for a new desktop environment, then Razor-QT in its current form would be my first choice. As of writing this review, I received word of the Razor-QT project merging with the LXDE-QT project. I have to admit I was very disappointed when I read this news. Razor-QT is fresh and has a good feel when being used. Call me a pessimist, but I don’t think a merge with LXDE-QT is a good move because I feel all of the hard work that has been put in to bringing Razor-QT to the current point will all be swallowed up by LXDE project agenda. If the developers can prove me wrong, I welcome it.

Thankfully, it was also announced in the same notice that Razor-QT 0.6.o will also be released which will bring the project as it stands today to a final point. All future project development and direction will be aimed at merging with LXDE-QT.

Knowing that Razor-QT’s long term future direction is a little uncertain and non-specific at this point, I find it hard to recommend to anyone unless it is purely for testing purposes. I enjoyed my time with Razor-QT while it lasted and thankfully, it still remains installed on my office system so I can reboot back in to it to re-enjoy that experience again some day. 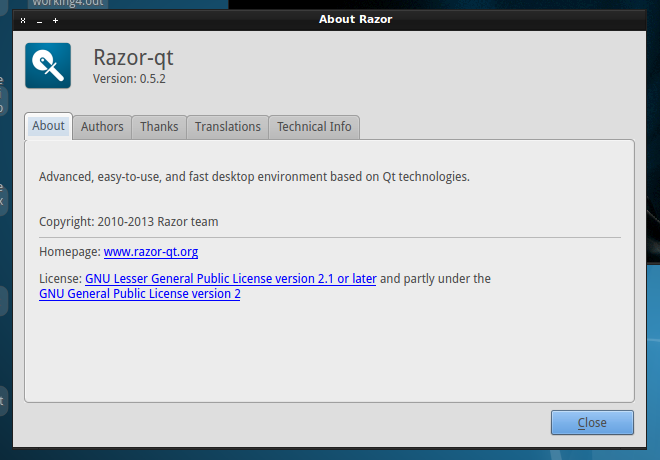