Last week saw the release of the much-awaited Oil Rush game by Unigine Corp. It is a unique real-time basedTower defense game that is developed on the proprietary cross-platform Unigine engine technology. The game is based on an actual incident, Deepwater Horizon oil spill and runs a social message It is an absorbing and challenging game, in which fighters, in a post-apocalyptic world, fight fierce battles to control oil reserves that remain.

Oil Rush 1.01 was released for download on multiple platforms-Microsoft Windows, Linux and Mac OS X on Jan 25, 2012, which was almost a year later than its expected release. Despite the delay, Oil Rush, designed byVitaliy Sidorov and Stanislav Zagniy is expected to bust charts atDesura and also at Ubuntu Software Centre and Steam. It is available at Unigine Online Store for $19.95.

A Real-time Strategy Game with an Environmental Message

Commenting on the game’s theme, Unigine’s CEO Denis Shergin says, “Fuel devouring armies that fight over the last drops of oil and pollute already trashed world is nothing but doublethink. That is a warning environmental message we’d like to deliver in a single-player campaign.” 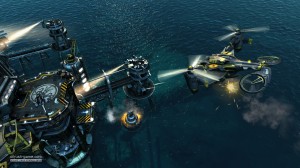 However, the games gains popularity largely because of the it s next-generation Unigine engine that makes all the difference from other Real Time strategy games.

Unigine engine though a company-owned technology has a powerful renderer that is supported on OpenGL4.0. Phoronix Test Suite usually posts tech demos on Unigine Engine tech for Linux platform.

Oil Rush is a phenomenal game, essentially for its out-of-the-world graphics experience. With most of the game happening over water, the game retains an original RTS feel. The water effects, the high resolution, rich environment and the stunning lighting effects gives this game so good.

The entire game revolves around capturing the active oil fields and retaining control over them. These precious oil rigs are contained in various types of rigs across several units. You can gain resources from oil wells and pumps you capture. You can also gain points by capturing random shipwrecks, however, you will not be able to build defensive structures. Yet, you will gain on units and can hence build on your strategic positions to initiate attacks.

Then there is the technology pole from which you can gain points. For every, enemy destroyed, players can earn points, which they can use to acquire additional weapon technologies like a radar or a more fortifying armor.

Oil Rush will gain popularity because of the unique rendering of the traditional RTS game. It’s interesting use of a water-theme drives its distinctive feel and game play. The Unigine engine ensures, Oil Rush delivers on all aspects taking Linux gaming to the next levels.