There is a fresh mint(ed) flavor on LinuxMint now. In the last one month, it has scaled the distro charts and is now the number one distro for opensource users. Distrowatch, the unofficial platform for all Linux distros, shows that LinuxMint has been has had the maximum number of hits in the past few weeks to become the most popular distros today. 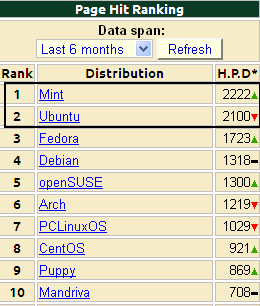 This meteoric rise is largely due to two factors-usability and functionality. It is but natural to assume LinuxMint to be a spin-off of the ever-popular Ubuntu distro.

LinuxMint is surprisingly the brainchild of Clement Lefebvre and a continued source of inspiration to, the now, millions of its users.

Mint has been able to build its user base largely to the intuitive and clear interpretation of community’s needs by Lefebvre.

Lefebvre himself admits that brilliant input from the community itself becomes the basis for the upcoming release.

As the project leader and the decision-maker that he is, Lefebvre has proved to be the visionary leader as well as he contributes to the ‘bigger features’ and allows for the development of Software Manger, Upload Manager etc. The bottom line however is that quality is more important, than delivering on schedule. Hence, largely schedules are not announced until new updates achieve the desired quality standards.

In retrospect, as users, this is a feature that has largely contributed to the success of LinuxMint for the desktop, especially during the last few months.

First, LinuxMint always has features that users like to use. There are not too many features, forced on them, until they elect it remain or propose be included.

This high-level of user-chosen features, coupled with some tight development and consistent quality only adds to user experience.

Contrast this to what suddenly happened at Ubuntu. Ubuntu, with a large business/corporate user base too, all of sudden decided to upgrade technologies and out-of-the-blue came Unity the desktop that brought tablet/mobile user patterns to the yet largely desktop-user Ubuntu community.

The rather arbitrary manner in which Unity, with its host of unfamiliar features, failed to provide what the user community needed, did lead to a loss of faith. Users found new faith in the familiar with LinuxMint as it continued to offer what was good Gnome 2.3 desktop. The same story was repeated with the entry of the sudden overhaul Gnome underwent to reach Gnome 3. The changes within the Linux 3.0 kernel in some ways too contributed to Ubuntu’s loss of popularity.

Where earlier LinuxMint had its loyal set of users, all of a sudden, in the months after Unity and Gnome 3’s debut, there was a sudden deluge in the number of users rising upto a growth almost doubled (40% more users).

LinuxMint is everything Ubuntu should have been. Instead Ubuntu is today, perhaps grown beyond community-user needs and looks towards enterprise services.

This has definitely left a lot of room for true open source philosophy to emerge, through meaningful distros like LinuxMint.

Shall we say with conviction, that today, LinuxMint is the Linux Success story that Ubuntu failed to be!