After the release of Unity and Gnome Shell, XFCE gained more popularity, fans and support for being the reliable “traditional” desktop environment. Fast, modern, mature, light and beautiful, XFCE is naturally becoming the default DE on big distributions like Debian.

This week we meet Nick Schermer for a quick interview about the present and future development situations and plans of the XFCE project. 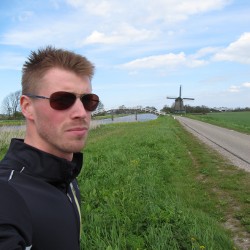 Can you tell us a few things about you, and how you got involved in the development of Xfce?

I’m a mechanical engineer from the Netherlands, 27 years old. I started using Xfce as a user when the 4.2 betas were released in end 2004 and climbed up to become an Xfce developer by assisting fixing bugs, work on panel plugins, build websites, eventually became the Panel maintainer and now working on more of less every part of the desktop.

It seems that you have done most of the development for the latest 4.10 release. Was it fun or stressful?

Contributing to Xfce is a hobby, so I try to avoid the stress and rather delay the release date. Although the last month of 4.10 was busier than it should be it was still fun. I did however stop active contributing till the end of the summer to focus more on other things in life.

Almost a year ago Linus Torvalds and many former Gnome 2 users were migrating to the Xfce world in order to keep things “traditional” on their desktop. How did this mass migration affected you the developers, the project itself and its development plans?

It made Xfce more popular if you believe the statistics / comments on the forum, websites and mailing list. The development plans haven’t changed because of that, but it supports the direction we continue to follow.
There are no intentions to make Xfce suitable for phones and tablets, because there will always be desktop computers. A year ago Jannis Pohlmann was the “one man to do it all” for the Xfce desktop environment, with 5 more people helping on their free time. What is the situation now? Are you still short of developers and active contributors?

I think every open source project could always use more hands. That said, since 4.10 not much contributions were made to Xfce. That is partly because there is no 4.12 roadmap yet, but it is also hard to determine what a new contributor can do. We prefer people discuss their idea on the mailing list first and then provide patches, however some expect to get directly GIT access.

Many people are waiting for the big step to GTK3. Can you tell us a few words about it, and a timeline maybe?

I’ve ported some parts of the desktop to GTK3 to give it some testing and I’m not a big fan of the results. Beside the fact that porting is a lot of work, the ported applications also used more memory and felt slower. On its own that’s not a huge big problem if GTK3 brings a lot of cool stuff for regular users, but it doesn’t.

So I prefer we depend on GTK 2.24 in Xfce 4.12 and focus on cleaning and GSEAL to make the GTK3 switch less invasive. GTK2 is still supported and will be available in every distro for a couple of years at least. Then in the mean time parts of the desktop can optionally compile against GTK3. Possibly we provide GTK2 and GTK3 version of the libraries. One of the things I always wanted to see on Xfce is more components, either core or “extras”. Are you planning anything towards this direction?

No, core should be the minimal desktop. Those components also follow the release model. Goodies as we call them can do and release whatever they want. This makes contributions and working on those components easier.
It is also never a goal to write an Xfce version of an application that already exists.

What would you say is the uniqueness of Xfce right now, and were do you see it in the future?

Xfce is just one of the desktops out there. For a relatively large user group it has the right balance between usability / customization / speed and stability. I’d be happy if we continue this path for a while.

Since you are a developer for a classic-designed DE, it would be interesting to hear your opinion on the controversial Gnome-Shell design. Did any of its elements gave you Xfce development team any ideas?

It would not be my DE of choice on a regular PC. That said I never used Gnome 3 for a long period of time too. It is important that users can decide what suits their needs, then eventually the best desktops will survive.

Xfce 4.10 release was about polishing the desktop and improving the user experience. What is Xfce 4.12 going to be about?

Prepare for GTK3 and more small features that make Xfce better for users and new techniques like systemd.

One last thing. Xfce is one of the most anti-marketing and unappealing names in the open source world. Xfce stands for Xforms common environment, but you are no longer using Xforms so why don’t you change it to something better?

Don’t most desktops have unappealing acronyms? I only see problems when “renaming” the software (commands will change, function names in the code/API). We tend to not use “Xfce” in the strings users read so they are not confronted with the name of the DE.

Thanks Nick! That was very interesting. I wish XFCE will continue to grow in every aspect 🙂