OTRS (Open-Source Ticket Request System) is a web-based ticketing system, widely used by businesses for services like customer support, help desks and call centres. The software is separated into several parts, the main section being the OTRS framework, which contains all central functions for the application and the ticket system; it is possible to integrate it with modules, Network Monitoring tools, FAQs, etc.
It has a lot of features, including:

First of all, install MariaDB on the server:

OTRS require that you change the following settings:

In /etc/mysql/my.cnf, under the [mysqld] section, paste:

If you want MariaDB to start up at boot time:

On to the next step. Now it’s time to download and install OTRS, building from source code. Download the code archive.
Extract with tar:

Move the extracted directory into /opt, renaming it in otrs

Check if the system contains all required PERL modules, executing the command:

Eventually, install required modules with apt (as suggested by the script).

Create a user for OTRS:

and add it to the webserver group:

In /opt/otrs, execute the following command:

With this step, you’ll activate a “default” config file.

If the response is “syntax OK” for all, it means that the Perl modules have been installed successfully.

Next, install the Apache web server and mod_perl, using apt:

OTRS requires a few Apache modules to be active for optimal operation. Enable with:

Restart the webserver, so it will load new configurations:

It is required to adjust file permissions, to allow OTRS to read and write files. In /opt/otrs:

Using the web installer at http://localhost/otrs/installer.pl, setup database and basic system settings such as email accounts. 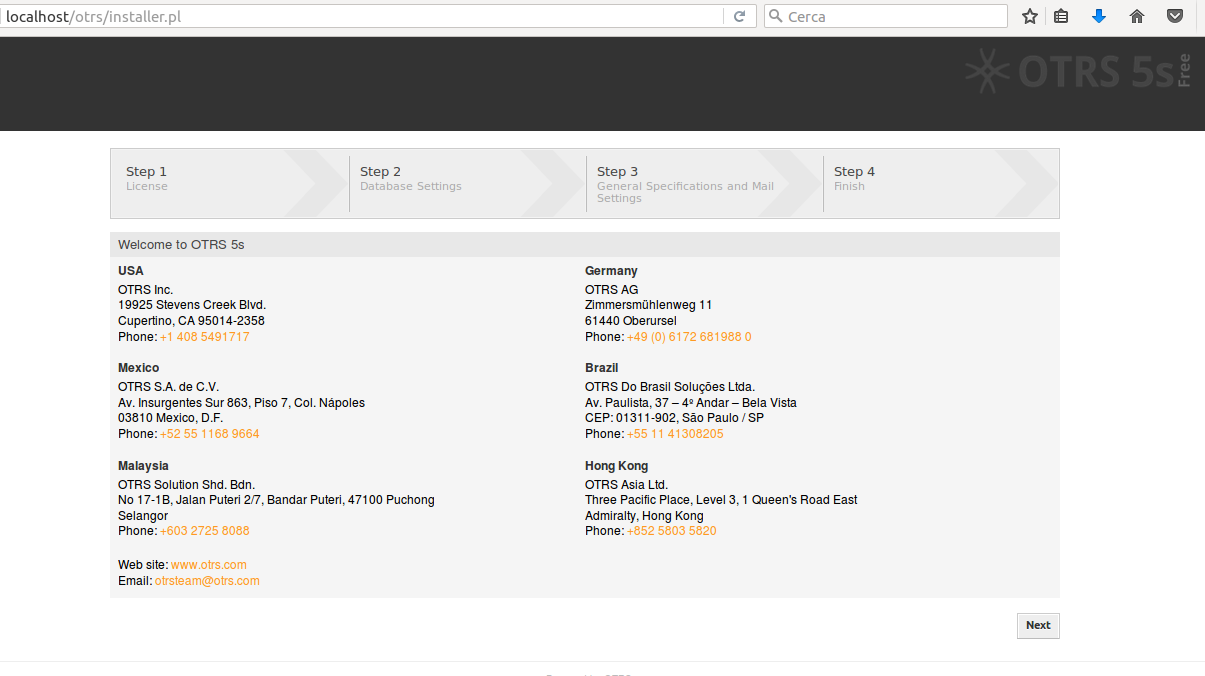 Click on “Next”. Accept the GNU AGPL, and then:

At the end of this process, it’s possible to login to the system at this URL: http://localhost/otrs/index.pl with the credentials configured in the installer.