Munin is a networked resource monitoring tool that can be used to monitor all computers on your network. It displays the gathered information from your system as graphs through a web based interface. With the help of Munin, you can monitor the performance of your computers, services, networks, SANs, applications, weather measurements etc.

Munin uses RRDTool and a frame work written in perl. Munin has a master-node architecture in which the master connects to all the nodes at regular intervals and asks them for data. It then stores the data in RRD files, and updates the graphs.

While this tutorial is applicable for CentOS 6.5 32 bit Edition, it should serve you well on other RPM based distributions too.

Munin will not be found in base repositories, hence we add EPEL repository to install Munin. Refer the following link to Add EPEL Repository in your CentOS 6.x systems.

Fedora users need not to install EPEL, Munin is found in the default repositories of Fedora.

Since Munin is a web based Monitoring tool, your CentOS server should have a working LAMP stack. To install LAMP server on CentOS 6.x, follow the below link.

After installing munin, a folder named munin will be created automatically under your apache root document.

Add/Edit as shown below.

Add the following lines at the end.

You can change admin account name as per your liking. Now enter the following command to setup the password for the user “Munin”.

You don’t have to use -c parameter if you want to add additional users.

Note: Wait for a couple of minutes or reboot your system to allow munin to create necessary files/folders automatically on your apache root folder.

Now you can access the munin web interface from your browser with URL http://domain-name/munin or http://ip-address/munin.

Enter the username and its password which we created earlier. In my case its Munin and centos. 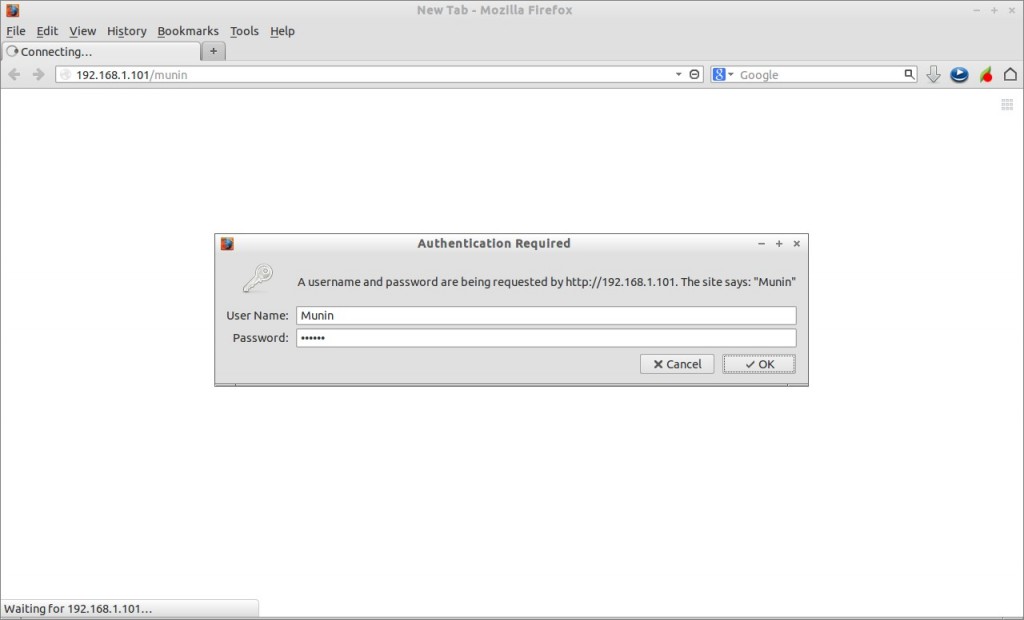 This is how my Munin dashboard looks. 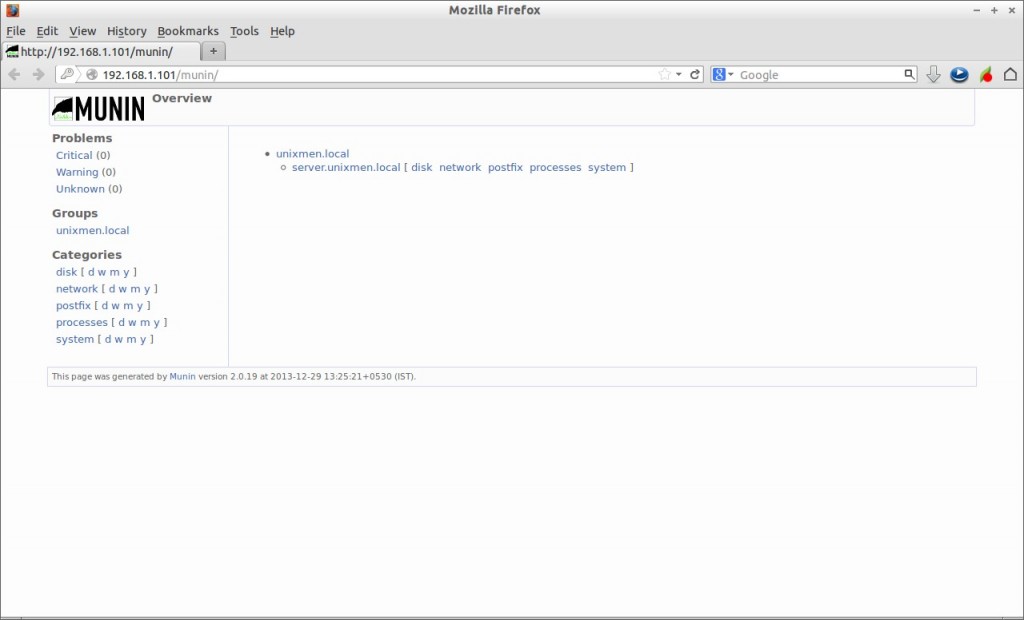 Click on the hostname, you’ll see now the server status as graphs. 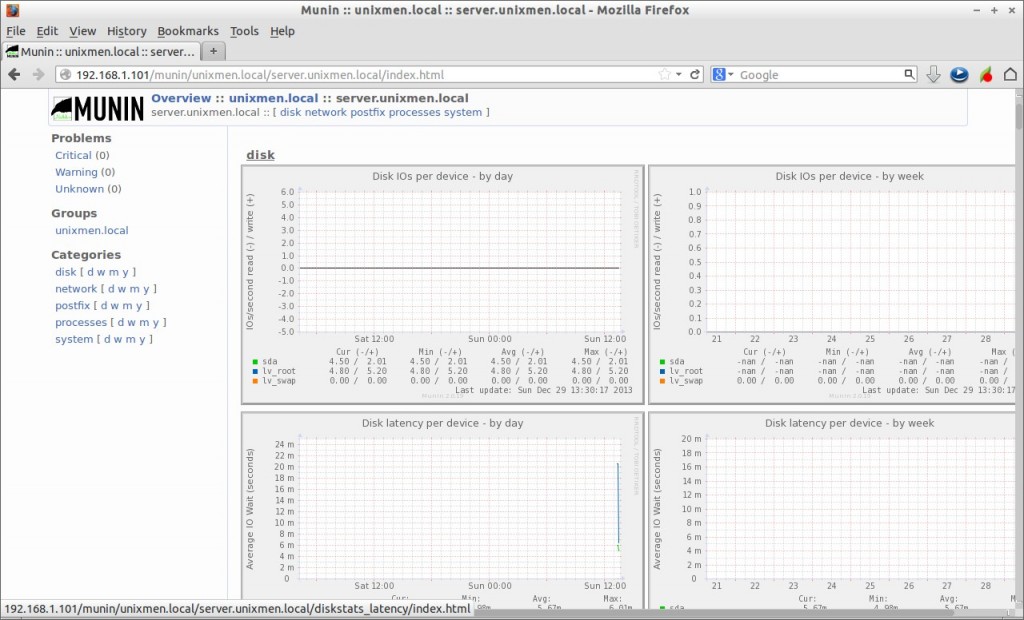 By default, there are five categories(plugins) on the left to make easy to understand and monitor system status. 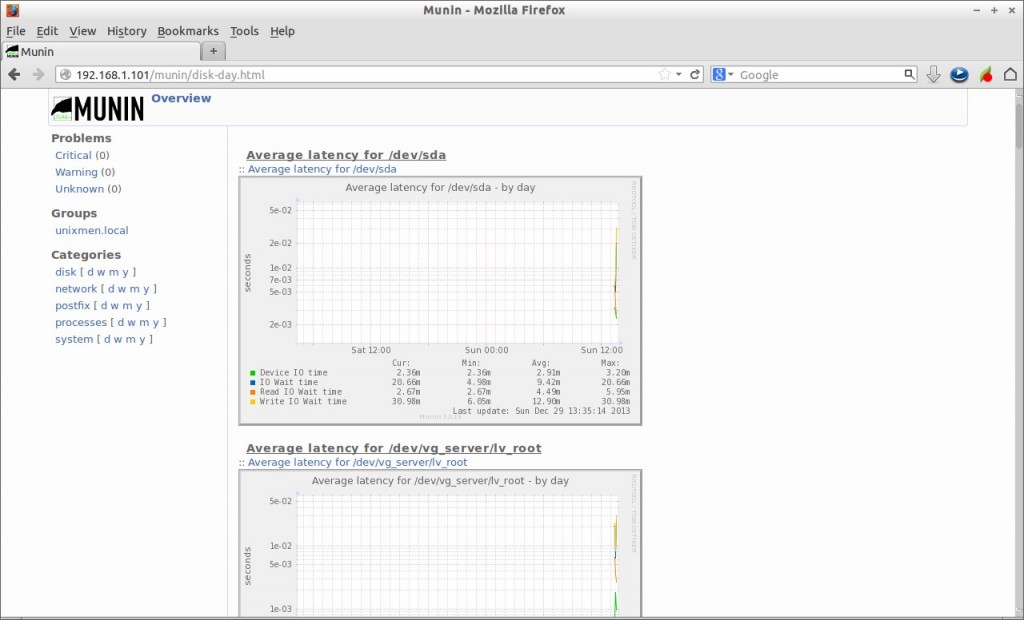 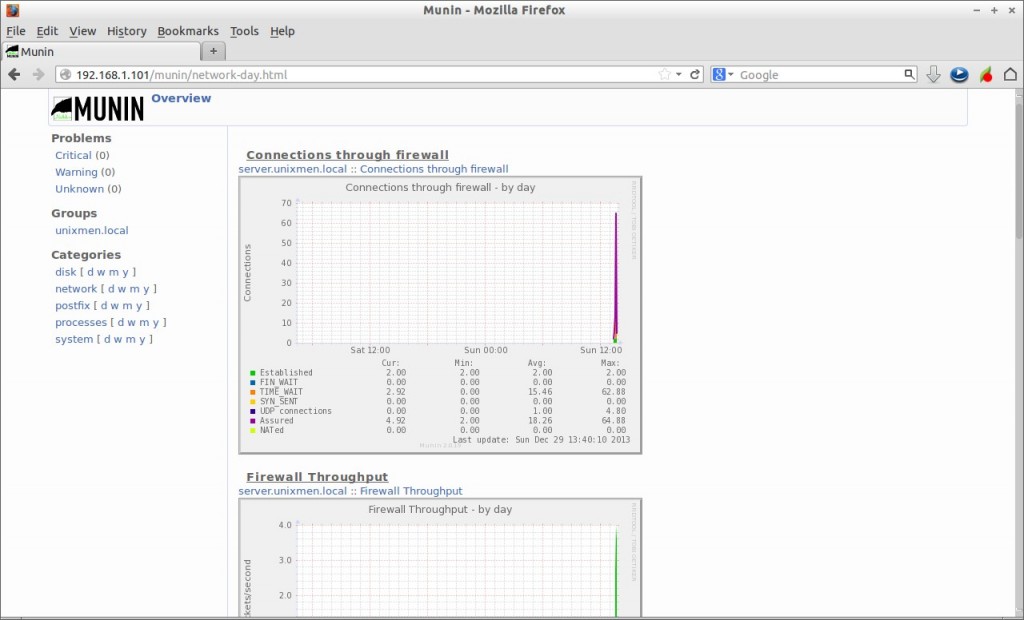 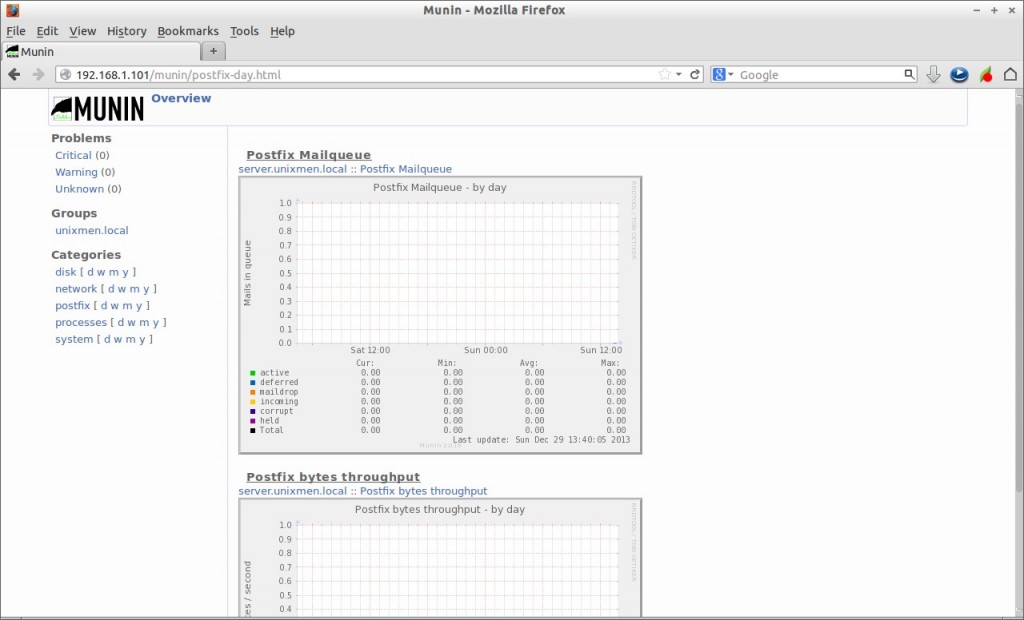 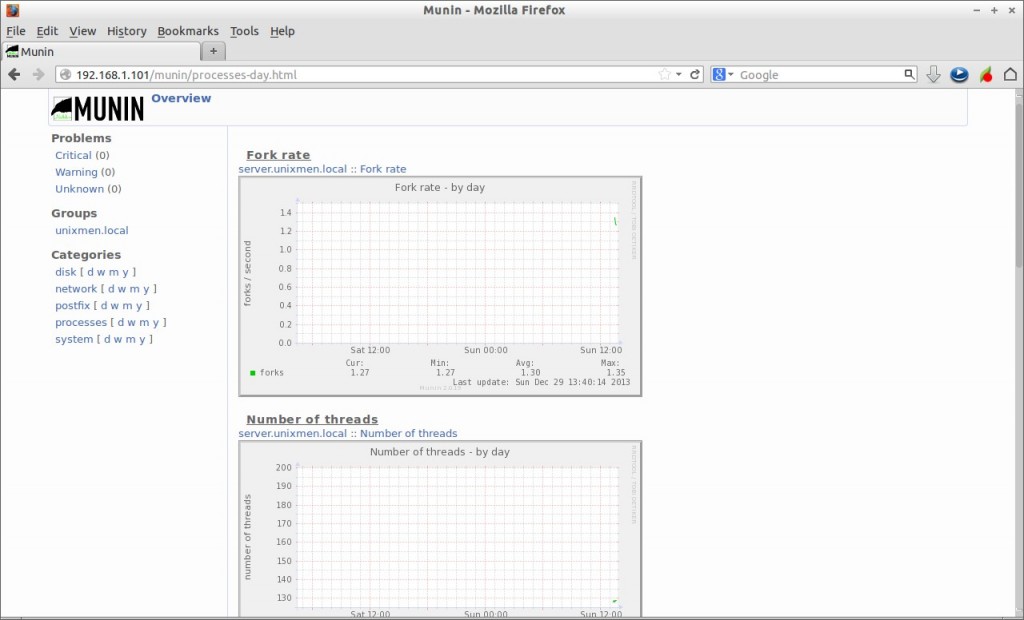 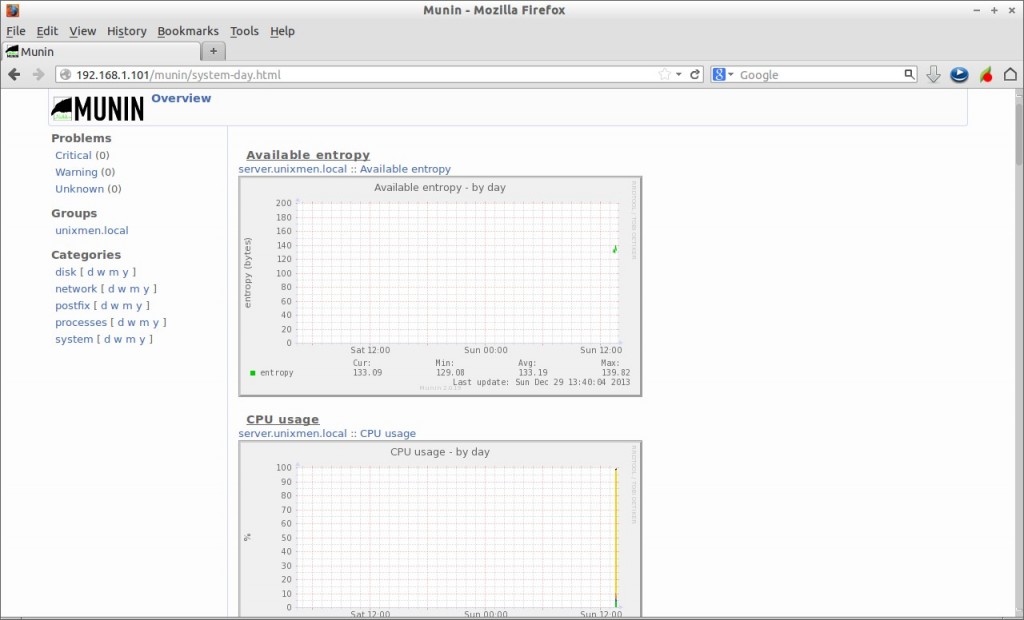 We can monitor remote hosts too. Go to your client systems and install munin-node package.

Then go to your Munin server and add the client system host name and ip address in /etc/munin/munin.conf file at the end.

Save and close. Restart the munin service. Wait for couple of minutes(approximately 5 minutes) or reboot the Munin server to allow munin to create necessary files/folders for your monitoring target. As you see in the above screen shot, My client desktop has been added to Munin server.

By default, there are only few monitoring items(plugins) will be shown in Munin interface. But there are many and we can add them if we need. Those items will be found under the directory /usr/share/munin/plugins/.

For example, here we will add mysql plugins. To do that, create a sym link to the plugins as shown below.

Restart munin-node service on your server.

Wait for 5 minutes and you’ll see that the mysql items will be added as shown below. 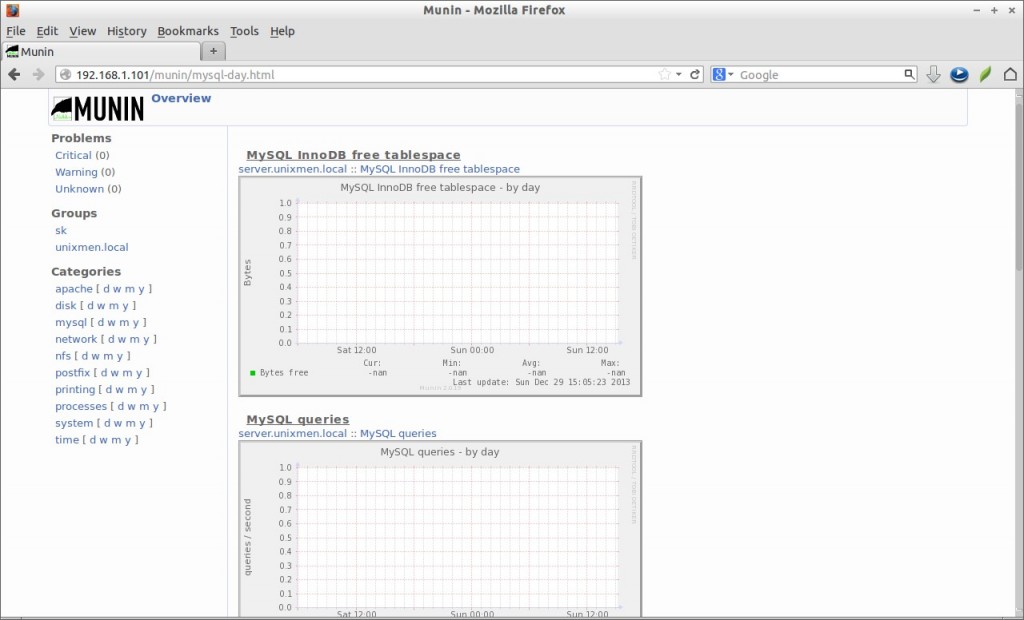 That’s it. We reached the end of this tutorial. Most of you will probably figure out how to install and configure Munin server/clients and also how to monitor the various services using Munin. But while it’s fairly simple, it’s not trivial. Any how If you need additional details, refer the link given below.