Apache Libcloud brings interoperability among different cloud setups/providers.  It provides only single Application Programming Interface to manage various cloud resources. It fulfills the long time dream of hiding the differences among multiple cloud systems. Now developers can write applications that will run on almost all popular cloud infrastructures with great ease. It supports all popular cloud service providers like Amazon, RackSpace, Openstack, VMWare etc. There are more than 50 cloud service providers who are being supportd by Apache Libcloud now. Simply use this API to code your applications and you will go live on any sort of cloud infrastructure within minutes. It is developed in python and supports all latest python versions.

Apache Libcloud has capability to manage all important components of a public or private cloud. If we classify its capabilities, here are the cloud computing areas that are supported by Apache Libcloud.

The supported python versions by this API are: Python 2.5, Python 2.6, Python 2.7 and Python 3.0 . Looking back at the history of Apache Libcloud, it was first started in 2009 as an open source project by a company called Cloudkick. Later, it joined Apache Incubator and has been under continuous development since then (2011).  Let’s see how to install and use this API on Ubuntu Linux system.

Let’s see how to install Apache Libcloud’s stable version on Ubuntu 16.04 system. The following set of instructions should also work on any older version of Ubuntu like 15.10, 15.04 etc. First of all make sure to upgrade your system using APT.

Once the update process complete, run following command to install pip on your system. Pip is needed to install Apache Libcould’s stable version.

Once Pip has been installed, run following command to install Apache Libcloud.

If you already had Pip installed on your system, you can update the Pip to the latest version by using the following command.

If you have old version for Pip, it should still install Apache Libcloud, but might display some warnings as shown in the following screenshot.

Congratulations! That’s it, the stable version for Apache Libcloud has been installed now.

You can upgrade the existing installation of Apache Libcloud by using the following command.

Here are some of the code snippets taken from its official site which demonstrate how to code using this API. Python developers might find it straightforward and easy. 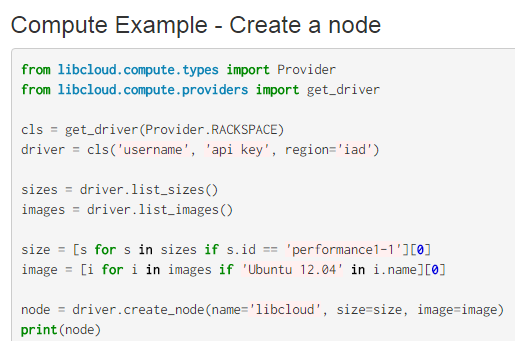 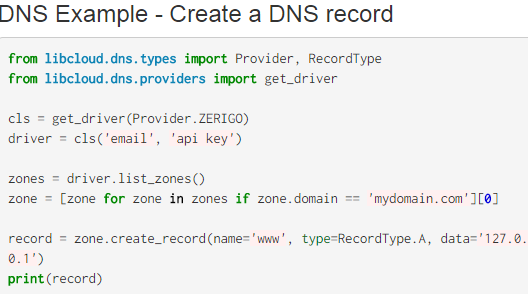 Apache Libcloud has gained massive popularity and some renowned companies like Rackspace, DivyCloud, Scaler, SaltStack, CloudControl etc have it in the production use. It is future of cloud computing technology, as interoperability among various cloud vendors is the demand of coming era. The installation and upgrade process for this API framework is pretty easy. Give it a try, you wouldn’t regret learning it 🙂