Zipping a file or directory is a popular practice when you want to send a huge file that seemingly takes up a lot of space. Zipping a file comes recommended when uploading the file/directory or sending it via email. Unzipping is the opposite of zipping. It decompresses the file allowing you to access its contents. In this guide, we will see how you can unzip a file in Linux.

Unzip a file in Linux

Before we proceed to show you how to unzip files or directories, we need to point out that while the unzip command-line tool comes preinstalled in most modern systems, it is not native to some distributions. Let’s see how to install unzip command.

For RHEL & CentOS flavors and their derivatives, run the following command:

For Arch Linux and it’s flavors such as Manjaro or Endeavor OS, run the command:

By now, we have covered how to install unzip in most of the Linux distributions. Let’s now walk you through the process of unzipping files and directories using the unzip utility.

How to unzip an archive file

We have earlier seen the basic syntax of unzipping an archive.

Unzipping is pretty fast and you will see similar output as shown.

Extracted files are owned by the Linx user that extracted the files. For example, if the zipped file was downloaded and extracted by the logged-in user ‘Winnie‘, then the uncompressed file or directory is owned by the same user.

How to unzip a file to a different directory

As seen in the previous example, the unzip command retains both the archive and the decompressed file will be in the same directory.

If you desire to extract or unzip your archive file to a different destination, use the -d flag to specify the destination path as shown.

For example,  to unzip the Nextcloud archive file to the

Also note that when you are unzipping to a directory that you don’t have permissions over, use the sudo command to obtain elevated privileges as shown above.

To confirm that the operation was successful, use the

command to verify the presence of the unzipped file.

From the output, we have verified that the Nexcloud archive was successfully extracted to the specified destination path.

Suppress output during the unzip operation

So far, we’ve seen a flurry of output during the unzipping operation. If you wish to have a ‘silent’ terminal and simply unzip without being bombarded by the output on the terminal, use the -q option to suppress printing out these tons of messages.

For example, using our Nextcloud archive, run the command:

If you have no clue or are unsure about the contents of an archive but wish to list what’s contained therein, use the -l option (For list)  to give you a summary of the contents of the zipped file.

Exclude a file when unzipping

Once you have an overview of the contents of the archive file, you may wish to exclude some files from being unzipped. To accomplish this fete, use the -x switch followed by the list of files to be excluded separated by a space.

Overwrite a file while unzipping

Suppose you have already unzipped your files and you are once again, running the command again. When this happens, you will be prompted whether you want to overwrite the file, skip the extraction, rename of skip the extraction of all files as indicated.

This way, you will overwrite the file without any prompts.

If you have several zipped files and you want to unzip them all at the same time, use the wildcard symbol as shown in the syntax below.

Take extra note of the single quotes ” around the wildcard. If you leave them out, you will certainly get an error.

In this tutorial, we walked you through the process of unzipping archive files using the unzip command. As you have seen unzipping files is quite a breeze and not complex. And this draws the curtain to our tutorial. We hope you found this guide on how to unzip a file in Linux valuable and that going forward, you will be able to unzip files without a hitch.

How to get wifi on Linux mint 19 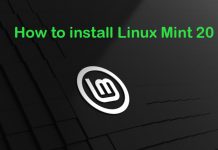 How to install Linux Mint 20