BSDGames package let you to have some Terminal games such as the famous Worm game, Backgammon, Gomoku and etc, for installing this package use this command in Ubuntu/Debian:

If your using Arch Linux/Manjaro use this command:

After installing that package by entering name of your game in terminal you can play it, for example just enter

in terminal and start playing the game 😀 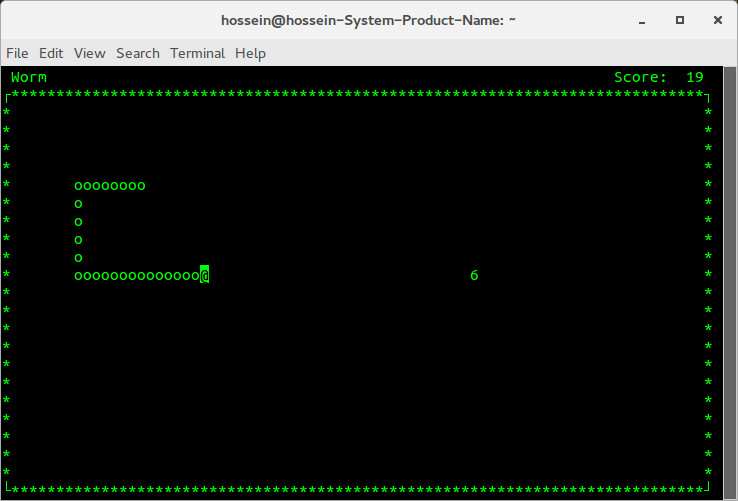 In worm game you should control the snake with arrow keys and catch the worms which are those numbers on screen and get more score.

Another really famous games that most of the people plays is backgammon, for playing this game enter

in terminal then it asks you to read the games rule so you’ll know how to play in another guess if you never played backgammon first search it in INTERNET then starting playing it in Terminal. 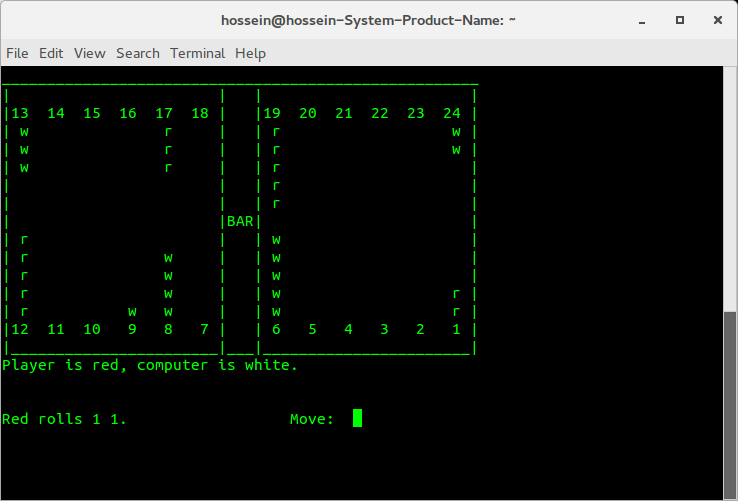 Another fun games you have in Terminal is Gomoku, in this game you choose to play with black nuts or white one and you also have an 19*19 play screen and the winner is one that put five nuts in row, enter following command in terminal to have the game:

A picture of this game: 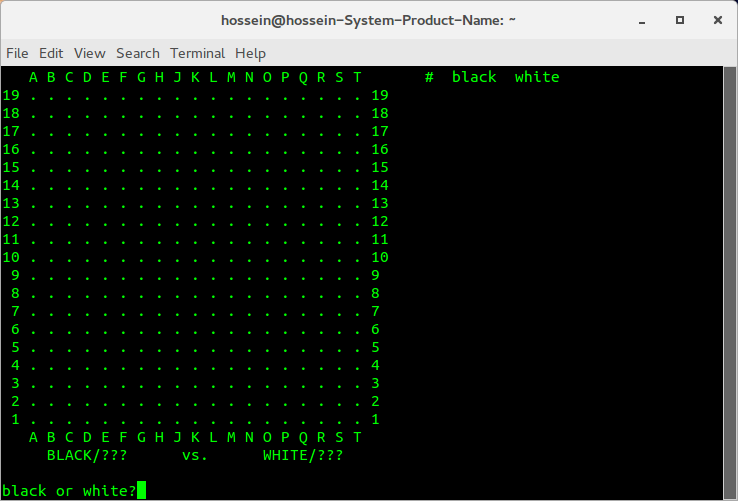 By the way for putting the nuts in screen you need to enter an English letter and without any spaces enter a number from 1 to 19 so you can have your nut in right place.

One of the most hard games in BSDGames to win is Trek which the maker of the game(Eric P. Allman) said:”It takes a long time to get used to game however it is worthy to play!”, Enter

in terminal so the game will get open and asks you to press Enter to continue and start asking some questions which you should answer before the game. first question is:

In the answer you should specify field length and the acceptable answers are:

Again it asks you:

Now you should answer for game difficulty, the acceptable answers are:

This game has resume feature so you can play the game and put the rest of game for next days so because of that game asks to enter a password so if you wanted to stop game and continue it next days others have to have your password to play game so they can’t ruin your game so when game asks you:

Enter a password and press Enter key to pass, Now the game got started and you should go for your first move, for moving nuts you should give your game command in front of “Command:” in game screen, you can move nuts with these commands:

In command above 06 is your coordinate, for more information read the man page:

Boggle is nice game among this games that helps you to improve your English, Accuracy and etc, in this game you have a limited time to find some meaningful words from a table of letters and put them in next to each other 😀 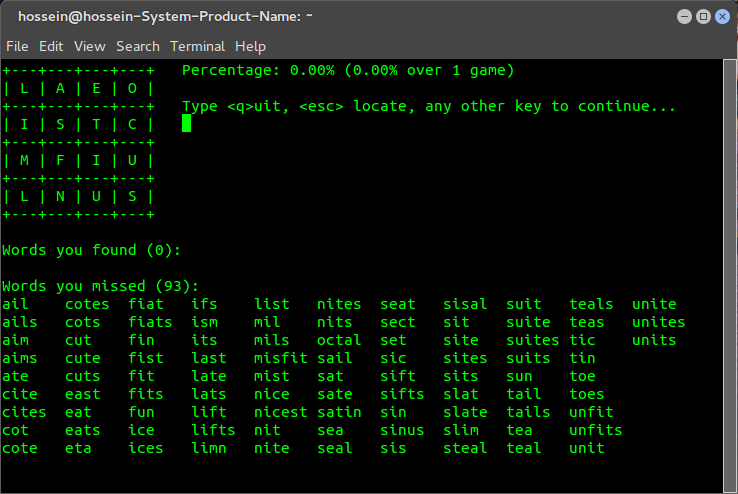 If you like Sudoku, you can play it on the terminal by installing Nudoku. To win the game, you must figure out the logic and fill the 9×9 grid using the digits between 1 and 9. 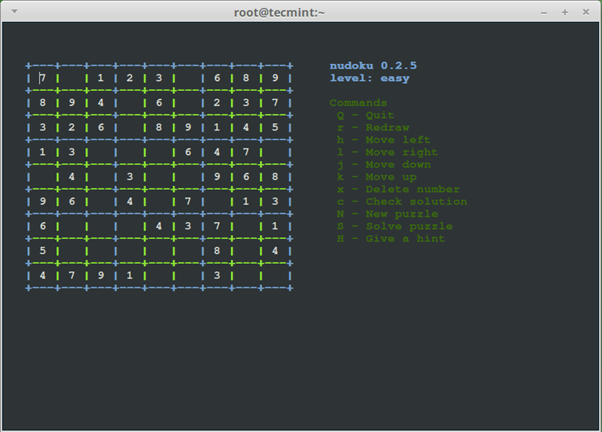 Like any game of Sudoku, it has different difficulty levels that you can set up. You can install Nudoku by running the following commands:

If you’re looking for something more interesting, you could try playing 2048-cli. It’s a terminal implementation of the popular game 2048, which has the properties of threes. This game is most popular on iOS and Android. To play it on your terminal, use the following commands to install it:

One of the best games you can play on the Linux terminal is MyMan. It’s essentially Namco’s famous game PacMan but built for the terminal. Besides running on Linux, it also works on Unix-like OSs such as Solaris and OpenBSD. 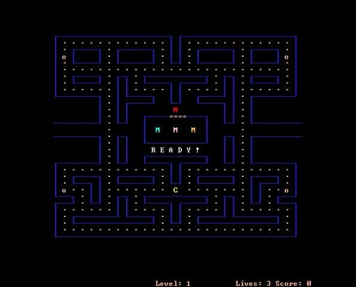 You can find the installation instructions on the official site here.

Greed is one of the most unique games we’ve come across. It is a mix of PacMan and Tron and comes with a distinctive colored text interface. 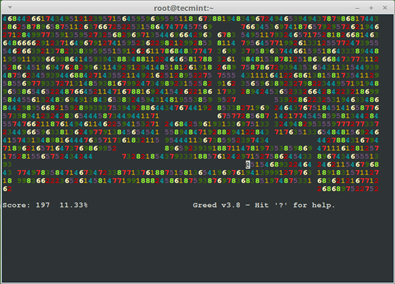 The idea of the game is that you must use the arrow keys to “eat” as many digits on the screen as possible. You can move in any direction; however, the digits you eat dictate the number of steps you’ll take in the chosen direction.

To install it on Debian-based systems, run the command: sudo apt-get install greed

One of the more straightforward and fun games is Moon Buggy. The idea of the game is that you control a buggy on the moon’s surface. There are craters on the surface that you must control the buggy and jump across.

Robot Finds Kittens is one of the most fun games you can play on the Linux terminal. You control a robot and must look around different objects to find the hiding kitten.

Whenever you check around an object, you will see a description indicating what you have found. 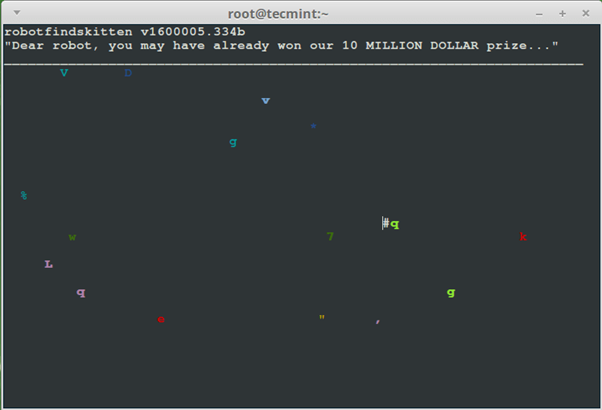 You can find the details of the game and installation instructions at http://robotfindskitten.org/.

Space Invaders is one game that can help you kill time like no other. To play a similar game on your Linux terminal, you can install nInvaders. You control a warship at the bottom of the screen and must defend the earth from attack.

Run one of the following commands depending on your OS to install the game:

We said fun in terminal but fun doesn’t mean just some games! let’s go and see some funny commands such as Cmatrix, bb, sl and etc.

We know that “ls” command list our files in a directory but if we use “sl” command instead we would see a train that pass in our terminal so install the package with following command:

Now let’s run it by

in terminal, and the output will be like this: Now let’s check something even more fun, you watched matrix movie now let’s enter a command to have matrix world in our terminal so first of all install “cmatrix” package by following command: another funny command is “cowsay” which can say things you like as a cow! first install the package: 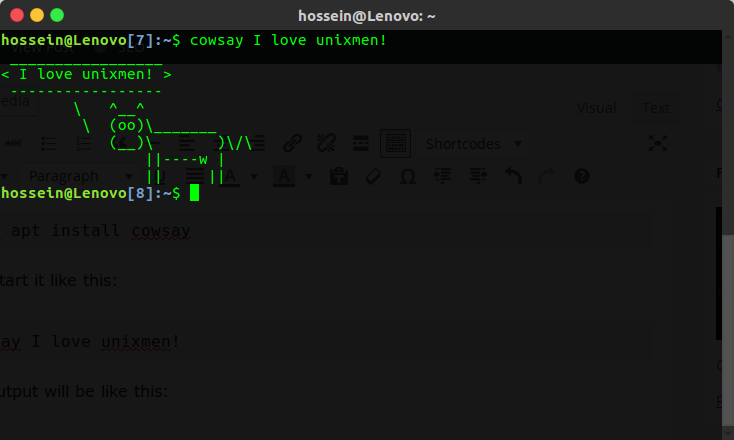 It can even be graphical so install “xcowsay” package with this command: There is a package namely “fortune-mod” that helps you to get nice sentences, first install package with this command:

Now run following command in terminal to get your sentence, each time you run command the sentence will be different: Oh! by the way you can even pipe the command with “cowsay” like this: If you like to have fire in your terminal enter following command and install needed package: I wish you enjoy from your terminal 😀