I never had plans to test out Linux Mint 15 “Olivia”. But when word came about the office that it had gone stable and was now available, I decided to give it a try anyway. The release is quite bizarre because at the time of writing this article there has been no Release Announcement on the Linux Mint website. Yet, looking in the source mirrors, it’s readily available for download. So I would expect to see an announcement from the Mint team soon. Regardless of the oddity of the situation, let’s take a look at the latest update of Mint.

Linux Mint is a funny beast. Not much seems to change between releases. At least nothing obvious to the naked eye. Being highly based on Ubuntu, most of the underlying changes are done through on the Ubuntu side of things. And the Mint developers just add some additional software, apply their own implementations of different packages and slap on the (now) traditional Mint theme and you have a new release.

But one does have to give the Mint Developers credit where due, because the underlying changes that they have and do make are wonderful. They’ve provided one heck of a stable and powerful desktop.

“Olivia” is based on Ubuntu 13.04, the ‘Raring Ringtail’. When you first boot Mint 15, it’s traditional Linux Mint all over again. And that brings us to the aesthetics of the whole deal. 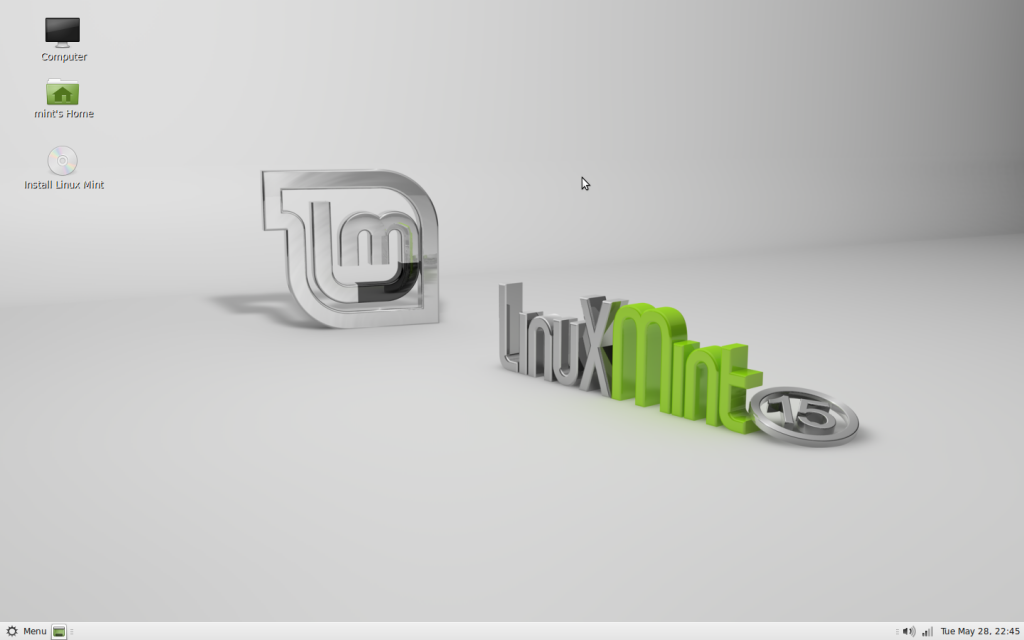 If you’re expecting something visually new and explosive with the new release, I’m going to have to disappoint you. Mint 15 looks identical to its predecessor. It uses the same slate gray theme and even the same default wallpaper with the updated version number of ’15’. This is not a bad thing as the Mint theme really is quite easy on the eye. If you are starting to get sick of the default matching-gray wallpaper, then there’s plenty more colorful background on offer in the Background Settings that you can apply.

There’s not much to talk about with the visuals of Mint. It’s clean and simple and absolutely no fuss. My only gripe s with the window control buttons. I’ve become accustomed to having them on the left side of the window for a few years now. And I would have expected Mint to finally adapt to this change as have most other mainstream Linux distributions. But I see the Mint Developers still ship MATE with the window control buttons on the right side. Thankfully, there’s a nice little Desktop Settings tweak tool provided which makes the process very simple to change the button location as the user sees fit. It was certainly one of the first things I changed.

I tested out all of the usual software that comes pre-installed. I tried VLC Media Player for both audio and video as some of my acquaintances were reporting severe issues with VLC. I had no issues in my tests. And I also tested out Totem with the GStreamer codecs. I am not really a fan of the GStreamer codecs, but they remain popular by many people who want something simple that just works. Personally, I always use and rely on mplayer for all my audio and video requirements. Yet I was pleasantly surprised to find that Totem and GStreamer handled everything I threw at it. Even videos with subtitles worked perfect. If you want something that handles your entire audio collection a little better than just a player, then Mint also includes Banshee for audio management.

Although Linux Mint 15 is similar to its predecessor(s), it does pull in just a few new goodies to keep you interested. The most interesting addition I found was the new Software Sources tool. It’s basically a nice little tweaking tool that makes configuration of your software sources somewhat easier. I don’t want to spoil all the details of it at this stage because in the coming weeks I’ll be taking a closer look at this neat little package. Keep a close watch for that on Unixmen.

One thing did stick out. Firefox in Mint 15 came with no Flash Player installed. It’s a little bothersome as you would expect it to come installed in addition to the GStreamer codecs if you download the ISO with codecs installed. Of course this can easily be fixed by installing it yourself which takes only just a few minutes. But it’s still a niggle for some.

For testing, I used the 64bit MATE edition in which the ISO comes in at exactly 1.0GB. Everything works perfect, really. But that’s just what you naturally come to expect from Linux Mint now. It’s become a respectable, mature and stable operating system with very little complaints from anyone abroad.

In summary, here are some of the software applications and packages included in Mint 15: 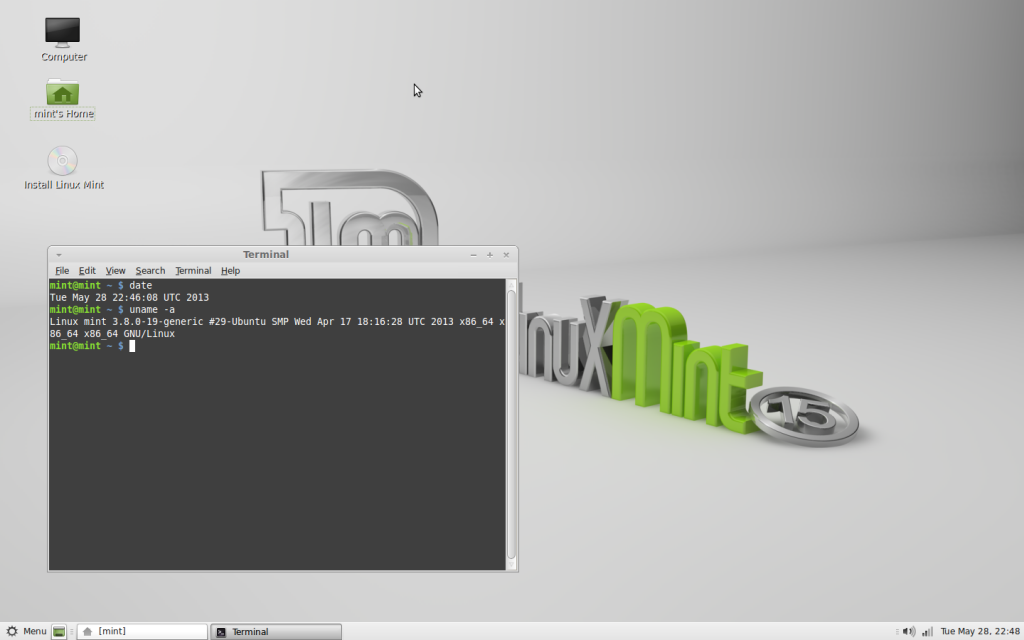 As a final note, Linux Mint 15 is a good release. It’s very similar to Debian in a sense that it really achieves what it sets out to do as a Linux based operating system.

If you’re new to Mint, then now is a perfect time to jump right in and give it a shot and see if it works for you. Mint users that already have version 14 installed will probably upgrade purely as a matter of habit rather than necessity, as there’s nothing ground-breaking that really requires you to make the leap to 15. Mint as a whole has a lot going for it. It’s available in both 32 and 64bit architectures. And you have a choice to two major desktop environments to choose from-MATE or Cinnamon. I’m a big fan of MATE but not of Cinnamon. Naturally, I would choose the former over the latter. But in truth, either system is capable of meeting most people needs. Oh and there is also a choice of having Linux Mint with our without all the codecs pre-installed. But if you’re serious about having a modern desktop operating system for everyday use, that choice is a real no-brainer. And not to forget that Linux Mint also comes in the form of a Debian version too. Just to add more choice to the mix. And as a side not, the more advanced users may want to check out the Debian edition and it is also a very good solid release. We’ll check out the latest Linux Mint Debian Edition in the upcoming weeks also.

For the moment, Linux Mint 15 “Olivia” is definitely worth checking out. Please let us know your thoughts about Mint’s latest update in the comments below. 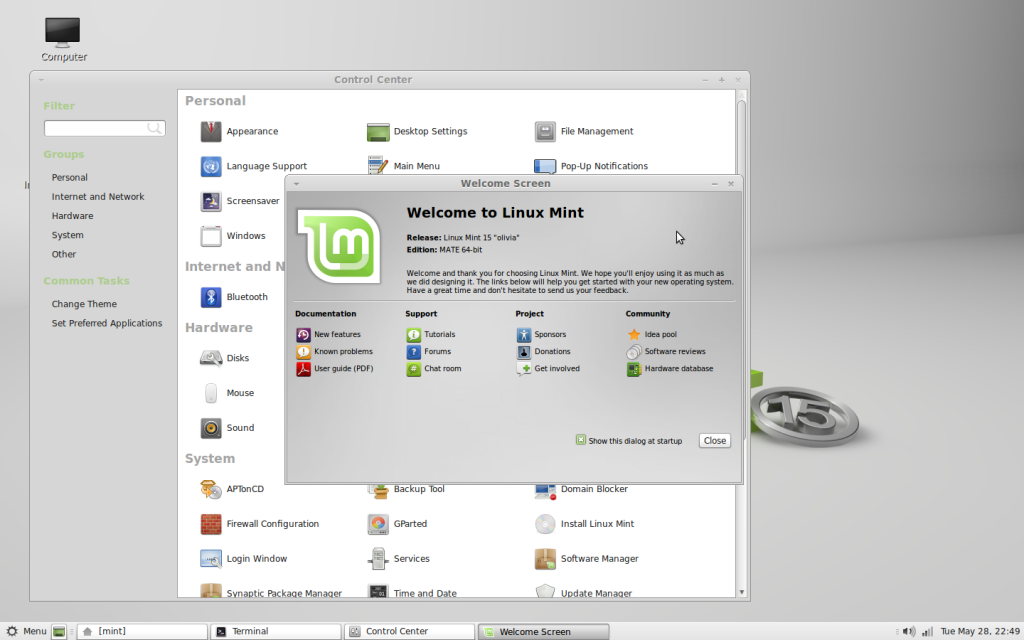